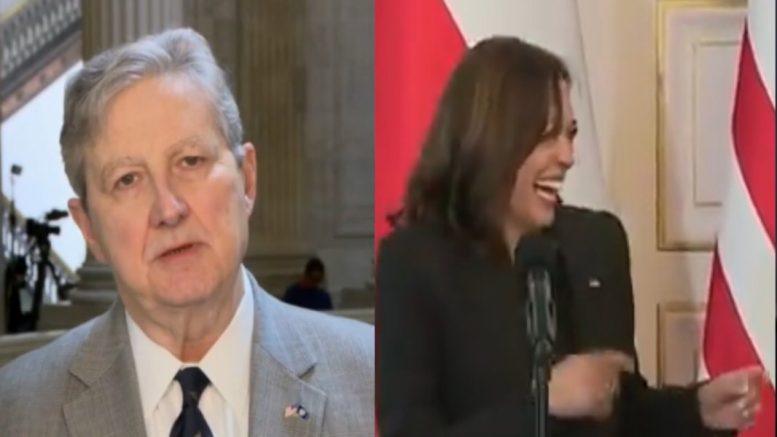 Senator John Kennedy (R-LA) reacted to a seemingly bizarre response from Kamala Harris after she was asked a question on how the United States could assist in the plight of Ukrainian refugees during the Russian military invasion. Harris appeared to look to Polish President Andrzej Duda for help.

“I’m wondering what the United States is going to do more specifically to set up a permanent infrastructure and, relatedly, is the United States willing to make a special allocation for Ukrainian refugees?” a reporter asked Harris during her joint press conference with Duda in Poland Thursday.

Harris did not answer the question, but instead, turned toward Doda, saying, “A friend in need is a friend indeed,” before laughing for several seconds.

Only Kamala Harris would find it appropriate to laugh when talking about the topic of Ukrainian Refugees.

“I’m not calling the vice president stupid. I’m saying what she said from Poland is stupid, and I don’t think anybody understands it. I’m not sure she understands it,” he said.

“There’s just not a lot she can add here,” Senator Kennedy added. Video Below

Bongino Rips Biden’s ‘Build Back Better’ Plan: ‘What the Hell Did They Actually Build Back at All?’