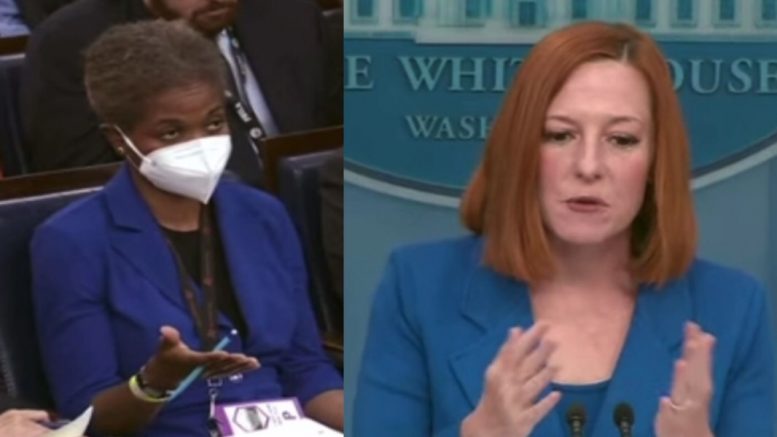 White House press secretary Jen Psaki on Wednesday defended remarks made by 79-year-old Joe Biden when he told reporters this week that masking is a personal decision after a federal judge in Florida on Monday declared that the Biden administration’s Covid-19 mask mandate for public transportation is unlawful, invalidating a regulation that required travelers in the U.S. to wear masks on airplanes, trains, taxis, buses and other forms of public transit.

U.S. District Judge Kathryn Kimball Mizelle in Tampa said the mandate exceeded the authority granted to the Centers for Disease Control and Prevention under federal public health law, as previously reported by The Freedom Times.

Biden on the same day, also told reporters that he hadn’t “gotten a brief from the CDC”, adding, “I don’t know” if his administration will try to appeal the federal ruling.

BIDEN, 3:30PM: “I don’t know” if we will appeal the federal ruling that struck down the mask mandate pic.twitter.com/QNMzE92B15

During Thursday’s White House briefing, Psaki was asked by a reporter, “The president said yesterday that people should decide for themselves whether to wear a mask on airplanes and  wondering, whether his comment was intended to signal a shift in thinking in the administration — away from mandates — towards more personal responsibility?”

Psaki responded, “The president was answering the question quite literally, which means, right now as you know, we are not implementing the mask mandate because of the court order — which we disagree with — while he is still abiding by CDC guidance and we recommend Americans do that across the country. They’re still recommending people wear masks on airplanes.”

“… But we are not — people are not legally bound to wear masks, so it is a point in time where it is up to people — it is their choice, in that regard,” she admitted after the court ruled the mandate exceeded the authority by the CDC. [Emphasis added]. Video Below

Psaki defends Biden saying masking is a personal decision as the administration seeks to reinstate required masking on planes and trains: "The president was answering the question quite literally, which means…we are not implementing the mask mandate because of the court order" pic.twitter.com/iiF1xDzstT

Psaki also admitted during the briefing, “Our focus here was seeing what power we had to respond” — to forced masking on public transit.

PSAKI: "Our focus here was seeing what power we had to preserve" forced masking on airplanes. pic.twitter.com/OV98Nh1g1j

Reuters's Trevor Hunnicutt to Psaki on masks: "When you said…it literally is a personal choice…Does that messaging still reflect a shift…to…a capitulation to…the public about wanting to be over this pandemic or people who have politicized…masks in the first place?" pic.twitter.com/gywFAmzTbO

Psaki: "To be clear, we are recommending everyone wear masks on planes." pic.twitter.com/ZvuE91JatE

Psaki claims “one plane” had people cheering and taking masks off. It was many planes.