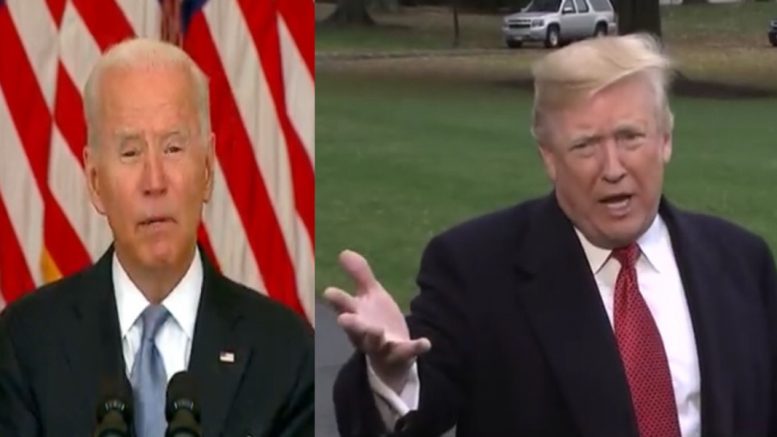 45th President Donald J. Trump issued a series of statements via email from his “Save America” PAC calling for Joe Biden to “resign” over the swift takeover of Afghanistan by Taliban militants as U.S. troops withdrew from the country after nearly 20 years on the ground.

The Taliban have reconquered Afghanistan in a lightening surge 20 years after they were toppled by the U.S. invasion. They took control of Kabul on Sunday, more than two weeks before the August 31 deadline set by Biden to complete the withdraw of American troops from the country, News 18 reported.

President Trump had brokered a deal with the Taliban in Doha in 2020 that would have seen the United States withdraw all of its troops by May 2021 in exchange for various security guarantees for the militants.

Joe Biden, however, pushed back the deadline for the withdraw and set no conditions for it. Trump ripped Biden over the move, saying it would have been “a much different and a much more successful withdraw” if he were still the current Commander in Chief.

“What Joe Biden has done with Afghanistan is legendary. It will go down as one of the greatest defeats in American history!” President Donald Trump declared in a Sunday statement.

“It is time for Joe Biden to resign in disgrace for what he has allowed to happen to Afghanistan, along with the tremendous surge in COVID, the Border catastrophe, the destruction of energy independence, and our crippled economy,” Trump demanded. “It shouldn’t be a big deal, because he wasn’t elected legitimately in the first place!” Continued Below

In a Monday statement, Trump said, “First Joe Biden surrendered to COVID and it has come roaring back. Then he surrendered to the Taliban, who has quickly overtaken Afghanistan and destroyed confidence in American power and influence.”

“The outcome in Afghanistan, including the withdrawal, would have been totally different if the Trump Administration had been in charge. Who or what will Joe Biden surrender to next? Someone should ask him, if they can find him,” he recommended.

“Can anyone even imagine taking out our Military before evacuating civilians and others who have been good to our Country and who should be allowed to seek refuge? In addition, these people left topflight and highly sophisticated equipment. Who can believe such incompetence? Under my Administration, all civilians and equipment would have been removed,” the former president said in another statement. Continued Below

“Afghanistan is the most embarrassing military outcome in the history of the United States. It didn’t have to be that way!” Trump expressed in an additional statement on Monday.

“The corrupt Presidential Election of 2020 got us here. Never would have happened if I were President!” he added.

On Sunday, the Taliban took control of Kabul. The co-founder of the Taliban has been declared the new President of Afghanistan after the terror group announced the 20-year Western occupation ‘is over now’ and proclaimed an Islamic state during a triumphant speech from the Presidential Palace in Kabul.

Taliban fighters stormed the ancient palace on Sunday and demanded a ‘peaceful transfer of power’ as Kabul descended into chaos, with U.S. helicopters evacuating diplomats from the embassy in scenes echoing the 1975 Fall of Saigon which followed the Vietnam War.

Trump On WI Audit: “We Must Demand Our Elected Officials Follow The Law & WE MUST HOLD THEM ACCOUNTABLE”