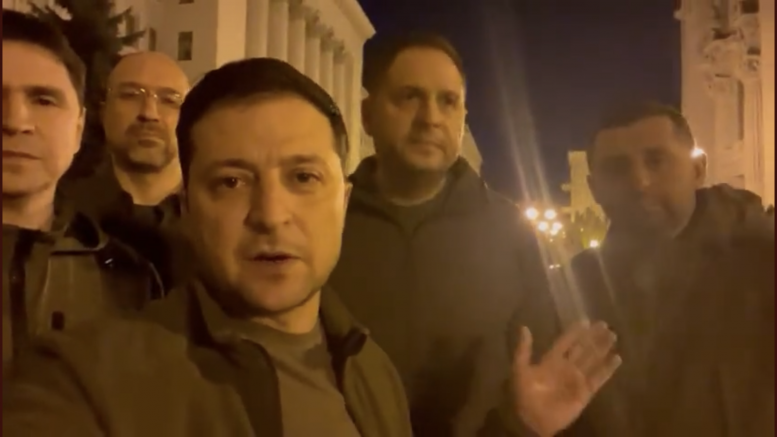 On Friday, as Russian troops reached Kyiv, President of Ukraine Volodymyr Zelensky posted a video to social media showing him next to the presidential palace in the heart of the Ukrainian capital, surrounded by members of his Cabinet.

“We are all here,” he said. “We are defending our independence, our country.”

“All of us are here, our military are here, our civil servants are here defending our independence and our state, and we mean to keep it that way,” Zelenksky said in the video message.

“Glory to our allies. Glory to Ukraine,” he added.

A message of defiance from Ukraine's president Zelensky and his administration.

They say they are on the streets of Kyiv and ready to defend the city. pic.twitter.com/ynwpCwwG5u

“I have to say frankly that this night will be harder than the day,” he said in a pre-recorded video from an undisclosed location. “This night, they are going to storm. All of us should understand what is awaiting us this night. We have to hold out. Ukraine’s destiny is being decided right now”.

Earlier, Kyiv residents were told by the defence ministry to make petrol bombs to repel the invaders, and on Friday evening witnesses reported hearing artillery rounds and intense gunfire from the western part of the city.