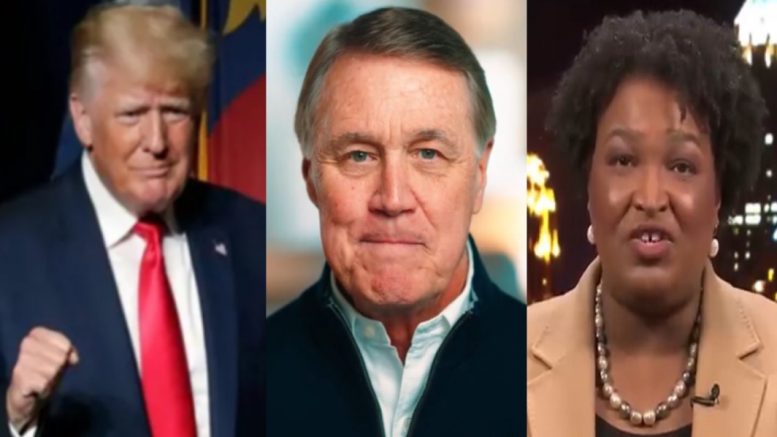 45th President Donald J. Trump issued a statement via email from his “Save America” PAC on Monday, announcing his “Complete and Total Endorsement” for former Georgia Republican Senator David Perdue, who is running for Governor of Georgia.

Perdue released a video message on Twitter earlier in the day, announcing his bid to “save” the Peach State and to “make sure Stacey Abrams is never Governor of Georgia.” Abrams, the former Democratic nominee for Georgia governor, announced last week that she’s running again in 2022.

I’m running for Governor to make sure Stacey Abrams is NEVER Governor of Georgia. We need bold conservatives who will stand up to the woke left, not cave to their radical demands. Join me in this fight to Stop Stacey and Save Georgia. pic.twitter.com/iQMMV97ynw

“Wow, it looks like highly respected Senator David Perdue will be running against RINO Brian Kemp for Governor of Georgia. David was a great Senator, and he truly loves his State and his Country,” Trump said in his first statement.

“This will be very interesting, and I can’t imagine that Brian Kemp, who has hurt election integrity in Georgia so badly, can do well at the ballot box (unless the election is rigged, of course). He cost us two Senate seats and a Presidential victory in the Great State of Georgia,” he noted. Continued Below

In a second email statement on Monday, the 45th President announced his “complete and total endorsement” for David Perdue.

“Great to see that David Perdue is running for Governor of Georgia. He is a Conservative fighter who isn’t afraid of the Radical Left, and is the only candidate in Georgia who can beat Stacey ‘The Hoax’ Abrams in November,” Trump said.

“Brian Kemp has failed Georgia. He caved to Stacey Abrams before the 2020 Election and allowed massive Election Fraud to take place. The signing of the Stacey Abrams-backed Consent Decree, so stupidly giving her and the Democrats everything they wanted, was a monumental mistake for not only Georgia, but also for our Nation!” he expressed.

“Kemp has been a very weak Governor—the liberals and RINOs have run all over him on Election Integrity, and more. Most importantly, he can’t win because the MAGA base—which is enormous—will never vote for him. We need strong leaders who will fight, and time is running out!” Trump declared.

“David Perdue will eliminate the Income Tax, secure the Elections, defend the Second Amendment, support our great Farmers, get crime in Atlanta and other places under control, take care of our great Vets, and put parents back in charge of the schools,” he noted of the former Georgia Senator.

“David Perdue and Herschel Walker (who I have already strongly endorsed) will make an unstoppable team for Georgia. Trump supporters will turn out to vote for these great leaders in big numbers. David Perdue has my Complete and Total Endorsement. He will not let you down!” the 45th President proclaimed. Continued Below

David Perdue expressed his gratitude for the 45th President’s endorsement, adding, “Let’s get to work.”

Let’s get to work. pic.twitter.com/qYvG2AMOdj

I’m running for Governor to make sure Stacey Abrams is NEVER Governor of Georgia.

We need bold conservative leadership to UNITE our state and stand up to the woke left.