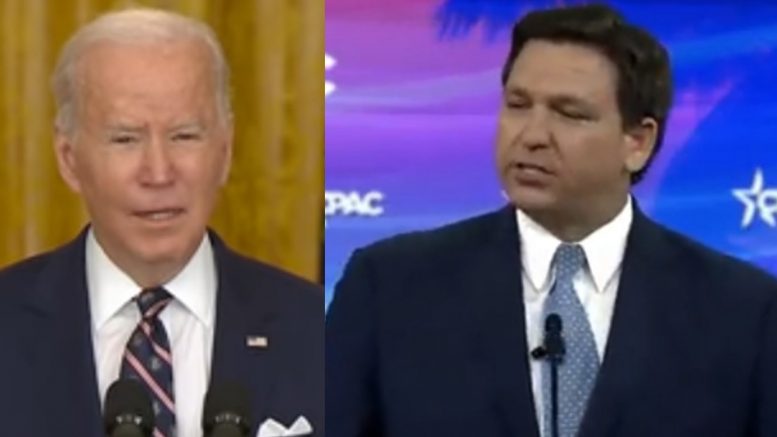 Florida Republican Governor Ron DeSantis, while speaking at the Conservative Political Action Conference (CPAC) in Orlando on Thursday, railed against Joe Biden’s border security policies and announced that the Sunshine State is “in the process of getting money from legislature” to re-route illegal aliens to Joe Biden’s home state of Delaware.

DeSantis previously said at a November 10 news conference that the federal government sent 70 planes carrying immigrants to Jacksonville from the U.S./Mexico border region under cover of darkness this summer and revealed that his office was looking at all legal avenues Florida can peruse, as previously reported by The Freedom Times.

“Since I became governor, we banned sanctuary cities in the state of Florida. And, we are in the process of getting money from the legislature so that if Biden is dumping illegal aliens into Florida from the southern border, I’m rerouting them to Delaware. We’ll do some in DC and Hollywood as well,” Governor DeSantis said.

GOV. DESANTIS: "We are in the process of getting money from the legislature so that if Joe Biden is dumping illegal aliens in Florida, I'm re-routing them to Delaware… we'll do some in DC and Hollywood as well." #CPAC pic.twitter.com/YaBp26T8hG

(Related: Gov. DeSantis To Biden: ‘I Don’t Want To Hear A Blip About Covid From You’ Until ‘You Get This Border Secure’)

Gov. Abbott: ‘Texas is Providing Charter Busses to Send These Illegal Immigrants, Who Have Been Dropped off by the Biden Administration, to Washington, D.C.’