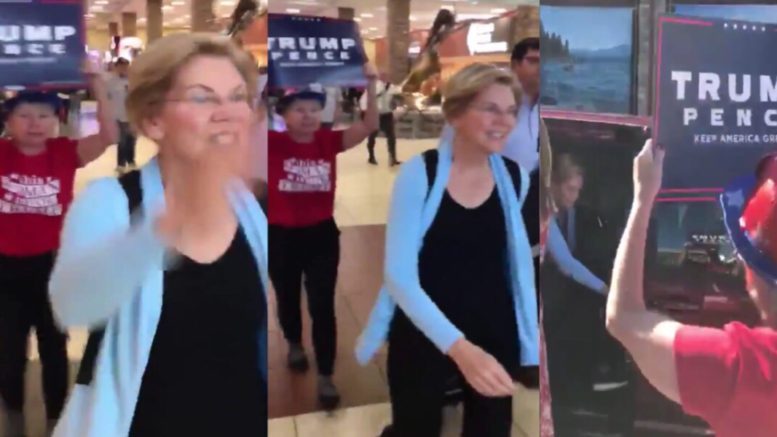 Before exiting the airport, Warren was greeted by a swarm of protesters, who surrounded her with Trump signs and chanted, “Stop the impeachment.”

Elizabeth Warren is seen waving to people in the airport, in a video, but Trump supporters quickly gathered around her yelling, “Stop the impeachment! Don’t Impeach,” amid Democrats’ nonstop impeachment frenzy.

The protesters followed Warren throughout the airport and all the way outside, but Warren did not say a word back to them. She seemingly hurried to get out of the airport, while rolling a suitcase behind her and carrying a backpack.

Other protesters could be heard yelling, “Go home!” and, “Did you say hi to Pocahontas? Pochahontas! Pochahontas!”

Warren quickly got into a van that was waiting outside of the airport for her, and the protesters kept chanting, “Go home! Go, Trump go!” and they displayed their Trump signs and red MAGA hats. (Video Below)

.@ewarren is greeted at the airport in Reno, Nevada by protestors telling her to "stop the impeachment." pic.twitter.com/dpa97xCKBu

Warren tweeted last month that “Congress is complicit” in failing to start impeachment proceedings against President Donald Trump amid the Ukraine controversy.

Asked by CNN at an Iowa Steak Fry, as she was leaving the grill area, what steps Congress needed to take, the Massachusetts senator said, “Impeachment, we need to start impeachment proceedings.”

“By failing to act, Congress is complicit in Trump’s latest attempt to solicit foreign interference to aid him in US elections. Do your constitutional duty and impeach the president, she wrote on Twitter in September. “A president is sitting in the Oval Office, right now, who continues to commit crimes. He continues because he knows his Justice Department won’t act and believes Congress won’t either. Today’s news confirmed he thinks he’s above the law. If we do nothing, he’ll be right.”

Sen. Cruz on Durham’s Latest Court Filing: ‘People Need to go to Jail for This, if These Allegations are True’