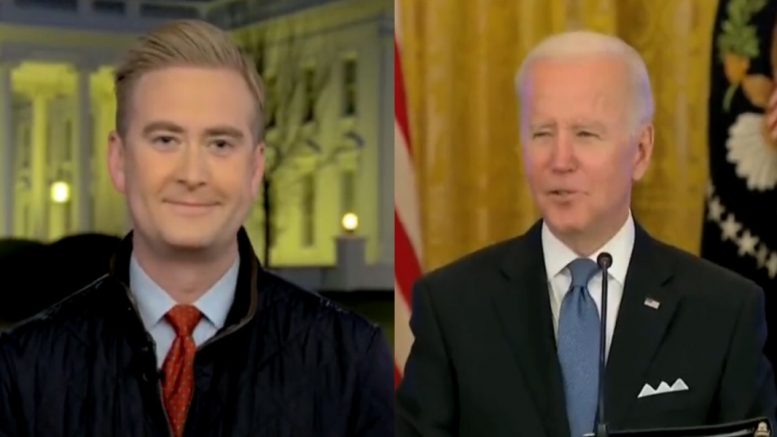 79-year-old Joe Biden was heard on his microphone calling Fox News White House correspondent Peter Doocy a “stupid son of a b*tch” on Monday — for attempting to ask him a question over inflation.

The vulgarity toward Doocy occurred following Biden meeting with the Competition Council and members of his cabinet to discuss ways to lower prices for American families.

After Biden’s prepared remarks, members of the press began shouting questions in hopes for the Democrat career politician to take a few before they were shuffled out the door by White House staff.

“Will you take questions on inflation then?” Peter Doocy asked Biden. “Do you think inflation will be a political liability for the midterms?”

As Doocy and the other reporters were being told to leave, Biden criticized the Fox News White House correspondent.

“It’s a great asset — more inflation. What a stupid son of a b*tch,” Biden was heard saying into his microphone. Continued Below

Last January, Biden warned about 1,000 presidential appointees on a video conference that he would fire them “on the spot” if he heard that they have shown “disrespect” to people in their professional conduct.

“I’m not joking when I say this: If you’re ever working with me and I hear you treat another colleague with disrespect or talk down to someone, I promise you, I will fire you on the spot — on the spot. No ifs ands or buts,” Biden claimed. “Everybody is entitled to be treated with decency and dignity.”

Meanwhile, Peter Doocy reacted on live TV to Biden calling him a “stupid son of a b*tch” for asking about skyrocketing inflation. Video Below

Doocy explained that he had asked his question to Joe Biden, but he “couldn’t even hear him because people were shouting at us to get out”.

“Nobody has fact-checked it yet and said it’s not true,” he added jokingly.

Joe Biden in January of 2021: “But I’m not joking when I say this, if you are ever working with me and I hear you treat another colleague with disrespect, talk down to someone, I promise you I will fire you on the spot.” pic.twitter.com/XXH5GoRORn

(Related: Doocy To Biden: ‘Why Are You Trying So Hard In Your First Year To Pull The Country So Far To The Left?’)