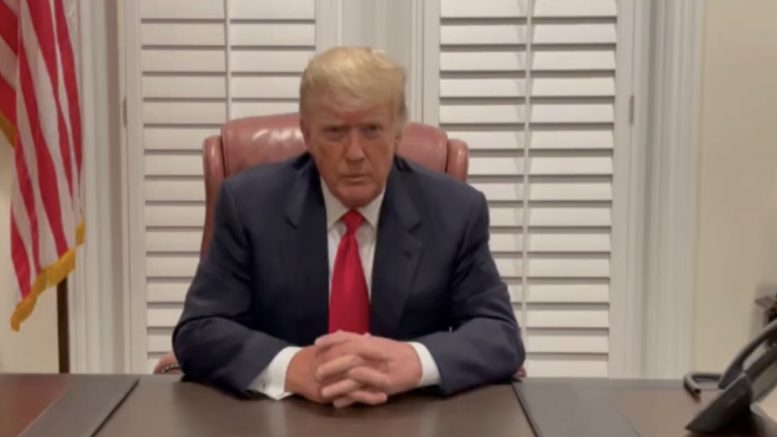 45th President Donald Trump said in an email statement on Monday that the rising tensions between Russia and Ukraine would never have occurred while he was in office.

NATO announced on Jan. 24 that it is placing extra forces on standby and sending more warships and fighter jets to Eastern Europe as Russia continues its military buildup near Ukrainian territory. NATO’s announcement comes one day after the U.S. State Department ordered family members of government employees at the U.S. Embassy in Kyiv to leave Ukraine, and authorized the voluntary departure of nonessential civil servants, The Epoch Times reported.

“What’s happening with Russia and Ukraine would never have happened under the Trump Administration. Not even a possibility!” the 45th President said in an email statement from his “Save America” PAC.

Russia recently told the U.S. to stop providing military aid to Ukraine, warning it had “almost completed” assembling 127,000 troops at the Ukrainian border.

The Russian Embassy in Washington said if the U.S. was “truly committed to diplomatic efforts to resolve the internal Ukrainian conflict” it would “abandon plans to supply new batches of weapons for the Armed Forces of Ukraine.” Continued Below

The United States and the European Union, wary of Russia’s intentions since it seized Crimea and backed separatists fighting government forces in eastern Ukraine in 2014, have warned Russia not to invade, per The Epoch Times.

Kremlin spokesman Dmitry Peskov has said the West is showing “hysteria” and is putting out information “laced with lies.”

“As for specific actions, we see statements by the North Atlantic Alliance about reinforcement, pulling forces and resources to the eastern flank. All this leads to the fact that tensions are growing,” Peskov said. “This is not happening because of what we, Russia, are doing. This is all happening because of what NATO and the U.S. are doing and due to the information they are spreading.” Continued Below

Meanwhile, Defense Department Spokesman John Kirby said on Monday that 8,500 US troops are on “heightened alert” if needed to deploy to Ukraine and “no decisions have been made to deploy any forces from the U.S. at this time”.

KIRBY: “No decisions have been made to deploy any forces from the United States at this time.”pic.twitter.com/9lDEMwXbb2

"What’s happening with Russia and Ukraine would never have happened under the Trump Administration. Not even a possibility!" pic.twitter.com/xjHsWz9SER