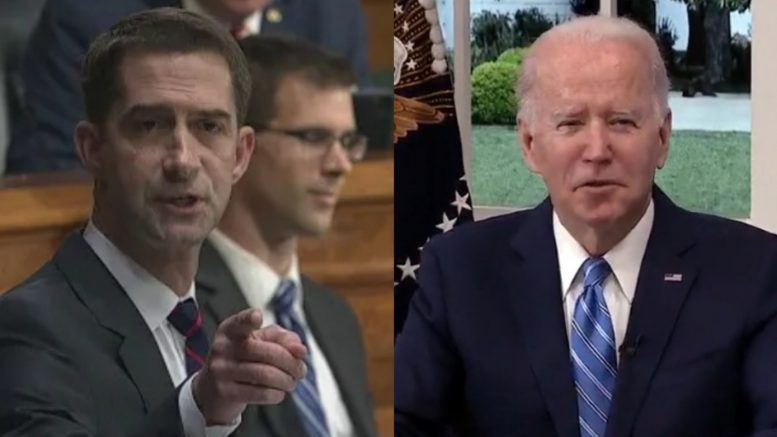 Sen. Tom Cotton had a fiery reaction after Joe Biden admitted during a Monday call with governors that there is no “federal solution” to reduce COVID-19, even though administration is pushing federal mandates to the pandemic.

Biden made the comment after Arkansas Governor Asa Hutchinson (R), who is the chair of the National Governors Association, warned the Democrat career politician against taking actions that may overstep, as States aim to curb the virus.

“One word of concern or encouragement for your team is that as you look towards federal solutions that will help alleviate the challenge, make sure that we do not let federal solutions stand in the way of state solutions,” Governor Hutchinson said.

“The production of 500 million rapid tests that will be distributed by the federal government is great, but obviously that dries up the supply chain for the solutions that we might offer as governor,” he added.

“There is no federal solution. This gets solved at the state level,” Biden admitted.

“I’m looking at [New Hampshire] Governor [Chris] Sununu on the board here. He talks about that a lot,” Biden said. “And it ultimately gets down to where the rubber meets the road and that’s where the patient is in need of help, or preventing the need for help.”

BIDEN, TODAY: “There is no federal solution” to COVID.

When Joe Biden says “there is no federal solution,” he’s trying to avoid blame for his incompetence.

If he really believes this, he should rescind his unconstitutional federal mandates.

There’s no federal solution, but the fed government can help by securing the border, approving safe treatments & tests, and appointing competent leaders at the FDA & CDC.

There's no federal solution, but the fed government can help by securing the border, approving safe treatments & tests, and appointing competent leaders at the FDA & CDC.

On the campaign trail last year, Biden vowed that if elected president, he would get COVID-19 under control. Since assuming office in January, the number of cases have increased. Continued Below

Not only failed, he literally gave up after pretending he had a plan to defeat COVID just to get votes. pic.twitter.com/UkzHGRcp0T

Biden also tweeted on August 18, 2020, “Donald Trump still doesn’t have a plan to get this virus under control. His failure to lead is costing American lives.”

Then, in his first few days in office, Biden said, “There’s nothing we can do to change the trajectory of the pandemic in the next several months.”

Biden now admits Covid should be “solved at the state level”, which is what 45th President Donald Trump did. Continued Below

Meanwhile, after telling governors there is “no federal solution” on COVID and it should be “solved at the state level”, Biden departed to Delaware.

NOW – Biden departs to Delaware beach house after telling governors there is "no federal solution" on COVID and it should be "solved at the state level."pic.twitter.com/Ux9RtPmb8m

Related: Trump Calls Out ‘Fake News’ For Not ‘Reporting The Real Facts’ Over Biden Vowing To ‘End’ C0VID

Bongino On Biden Saying He’ll Shut Down The Economy Again If Advised: “Single-Most Damaging Quote Of This Campaign”