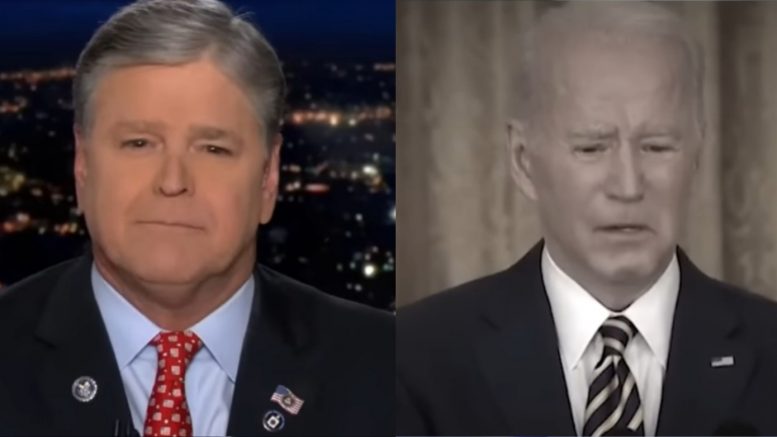 “Biden’s entire presidency has been a horror show both at home and abroad,” declared Fox News host Sean Hannity on his Friday night program.

“And by the way, Joe… definitely does not go to the office or the Oval office every morning… not even close. So far, Joe Biden has spent 150 whopping days on vacation in Delaware and this weekend he’s heading back to the beach in Delaware after a lengthy vacation at the beach in South Carolina, where he is going to build a wall to secure his premises.”

Related Article: Hannity: It’s Become ‘So Bad Under Biden That Even Psaki Is Now Suggesting Kickboxing & Margaritas to Help Ease the Pain’

Hannity continued, “Joe Biden is not serious about his work because he’s not mentally capable of being serious about work. He can’t even put his own jacket on like a functioning adult, but in the Democratic Party it just simply doesn’t matter.”

“Democrats don’t really care about Biden’s mental decline, his cognitive decline or the disaster in Afghanistan — now a little over a year ago,” he added. “They don’t seem to care about inflation, high gas prices, the recession — they don’t seem to care about any of it. They don’t even care that Joe’s son, zero-experience Hunter, appears to have sold access to the highest levels of the U.S. federal government all to make millions and millions and millions from China, Russia, Ukraine and many other countries that don’t particularly like the United States.”

Kennedy: Majority of Voters Think Biden ‘Would Be Better Off Selling Catheters on Late Night TV Than Serving as President of the United States’