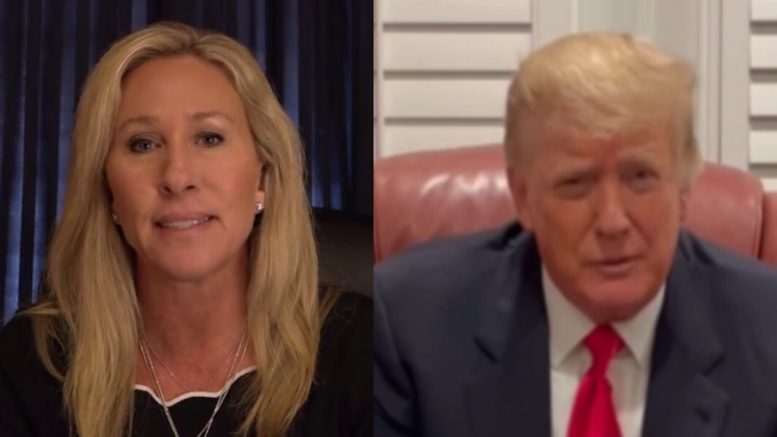 Rep. Marjorie Taylor Greene (R-GA) released a series of tweets on Monday disclosing details of a conversation she had with her “favorite President of all time”, Donald J. Trump, over a number of topics and concerns.

“We discussed many issues, people, races in ‘22 as well as vaccines and mandates,” Rep. Greene said.

In a series of tweets, Rep. Marjorie Taylor Greene wrote:

I just got off the phone with my favorite President of all time, Donald J. Trump. We discussed many issues, people, races in ‘22 as well as vaccines and mandates. We discussed #COVID19, how awful the virus from China has been, and how horribly it’s been politicized.

I have President Trump’s permission to tell you all that he is 100% AGAINST the mandates, but he still encourages everyone to get the vaccine and booster. That is his position. He also said if he was President he would never mandate the vaccines, and no one would be fired.

The key thing to remember is where #COVID19 came from. China! We should be holding those who made the virus accountable, not fighting one another. And protecting our freedoms while promoting life saving treatments, and giving the vaccines to those who want it. Not forced. Continued Below

For everyone that criticizes Pres Trump about when covid started with shoulda’s coulda’s and woulda’s, I think he and his administration did the best they could. The virus was brand new and we’d never seen anything like it. Biden deserves the criticism. He has no excuses.

President Trump also said that you wouldn’t be paying ridiculous high prices at the gas pump with him in charge. Keystone pipeline would be under construction, we would be drilling for oil, and NOT begging OPEC to drill oil for us. What a pathetic disgrace Joe Biden is.

I told Pres Trump that it makes me sick how America is no longer respected in the world because of the weakness occupying the White House. He told me: He would have NEVER abandoned Americans in Afghanistan, allowed 13 service members needlessly die, or armed the Taliban. Continued Below

Iran was ready to sign a deal and now they aren’t afraid of Biden. No one is. Russia would not be advancing and remember it was Pres Trump who shut down Russia’s pipeline, but Biden shuts down America’s pipeline. Disgraceful! North Korea was no longer a threat.

We discussed China. President Trump put tariffs on China against many people’s criticism and it was working! Now Biden is handing Americans over to full dependency on the very enemy who sent us the deadly virus that’s now politicized to control us all. There are reasons. And there are ways to deal with China.

But unfortunately, the guy they kept in the basement, who supposedly got more black votes than Obama and more than any other presidential candidate, won’t do the job because he and Hunter have special friends and connections in China.

We discussed the J6 Unselect Committee, as he rightly calls it, because it’s nothing but a committee of Pelosi Democrats and Republican picks were rejected. It’s just another scam and political witch hunt with no credibility just like the Russia hoax.

We discussed Georgia, my beautiful home state that I love so much. Fulton county is one of the most corrupt counties in the country. Everyone knows it. Makes me sick. Everyone knows widespread cheating occurred, even Democrat voters. Biden voters have buyers remorse! Continued Below

President Trump is very concerned about the border and the future of America. He says tens of millions are going to be in our country who don’t belong because of the Democrats, and some of them will be very bad people who will do horrible things. He said it must be stopped!

For what I told President Trump, I’ll tell you all just a few things I said. I told him I’m sick and tired of weak pathetic Republicans who won’t fight hard against the Democrats Communist agenda. I told him I need strong courageous people to help me in Congress.

I told President Trump that RINO’s like Mitch McConnell are to blame for all of our problems. He agrees. RINO’s are the worst! I told him Republicans in the Senate are approving all of Biden’s picks in record speed and it’s nauseating. They fought Trump’s picks nonstop.

I also told President Trump that the people are tired of investigations that do nothing and hold no one accountable. They want a plan and they want action that saves our country and puts Americans first! Enough of the talk. He totally agrees with that too.