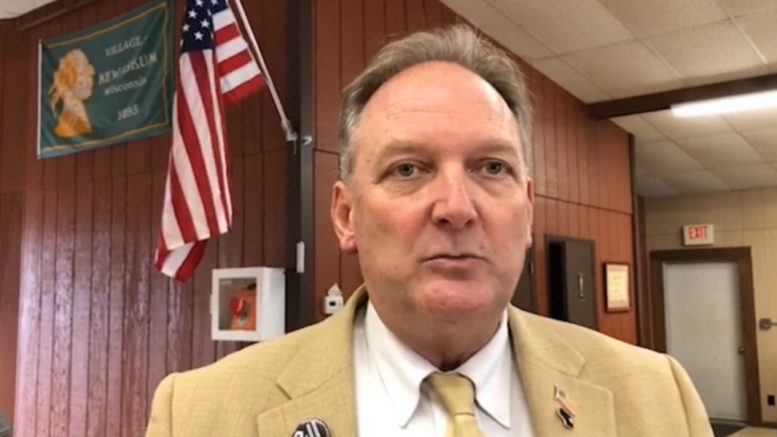 Wisconsin State Representative Timothy Ramthun (R-Campbellsport) released a statement on Thursday calling for the “decertification” of Wisconsin’s 10 electoral ballots, regarding the 2020 general election.

He issued a statement following the October release of the bi-partisan Legislative Audit Bureau report and the press release from the Racine County Sheriff’s Department on Thursday.

I have continued to pursue truth and integrity of our 2020 general election. Recent
developments have made it abundantly clear that the legislature should not have certified
Wisconsin’s 10 electoral ballots on December 14, 2020.

The release of the bi-partisan Legislative Audit Bureau report identified 44,272 voters did not reflect proper voter identification and also revealed the mass increase of indefinitely confined voters from 4,505 in 2019 to 169,901 in 2020.

Tainted or fraudulent, these alone should be enough to question the legitimacy of the 2020 election results.

Additionally, after review of today’s press release from the Racine County Sheriff’s
Department, it was confirmed on March 12, 2020, the Wisconsin Election Commission
knowingly and willfully directed all 72 county clerks to violate state statutes 6.84 and 6.875
regarding absentee voting in certain residential care facilities and retirement homes. Continued Below

This unlawful direction clearly broke state statute 12.13(2)(b)(7) which refers to intentionally
violating election laws. When combined with the Legislative Audit Bureau report, these actions verify that our election process was fraudulent.

Therefore, I call upon the Wisconsin Legislature to recognize its duty under Article 2 Section 1 Clause 2 of the United States Constitution, as well as the guidance provided from ss6.84(1), to decertify Wisconsin’s November 2020 election results by reclaiming its ten electoral ballots.

We can no longer delay with stall tactics, wasteful spending of taxpayer dollars, or the silence of the full legislative body. It falls upon us to take this historic action and answer the call for this injustice. It’s beyond time to work of, by, and for the people of Wisconsin. Continued Below

Meanwhile, Senate Majority Leader Devin LeMahieu on Monday announced that the State Senate is launching its own investigation into the 2020 election.

“The audit released on [Friday] paints a grim picture of the Wisconsin Election Commission and their careless administration of election law in Wisconsin,” LeMahieu said in a statement. “The audit shows numerous failures within WEC which undermined the free, fair, and transparent elections Wisconsinites deserve.”

That audit found numerous problems with voter roll accuracy, absentee voting, the use of drop boxes, and raised questions about the role of outside groups like the Mark Zuckerberg-funded Center for Tech and Civic Life, Just The News reported.

Sen. Howard Marklein (R) said his Joint Audit Committee will hold hearings and lead an investigation. “I am currently reviewing the audit report which made 30 recommendations, including 18 items that may involve legislation,” Marklein said. “We have taken action on a number of these items in legislation that has already been vetoed by Governor Tony Evers, but we will consider our options.”

LeMahieu said one of the options may be ending the Wisconsin Elections Commission.

“We will assess the full impact of WEC’s deficiencies and determine the best course of action for the future of election administration given the now documented failures of the current administration and staff,” LeMahieu said in a statement.

(Related: Trump On Wisconsin Removing ‘205,000 Voter Registrations’ After 2020 Election: “Would This Mean That We Would Have Won Wisconsin?”)