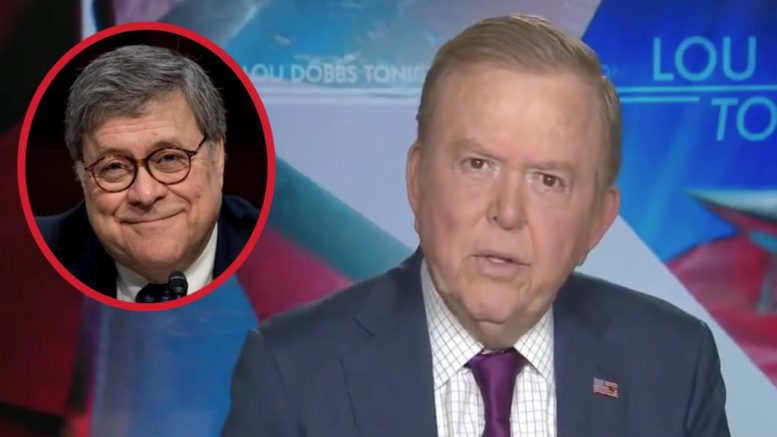 Thursday on Fox Business, host of “Lou Dobbs Tonight”, implored Attorney General William Barr to stand up, lead the Department of Justice, and restore the integrity of our elections.

“Attorney General Bill Barr hasn’t hasn’t been seen in public for two weeks,” Lou Dobbs said. “Barr last appeared at an event in Indianapolis on October 22. Since then, he’s gone radio silent, completely silent about the radical Dems efforts to steal an election in many parts of the country”.

Lou Dobbs pointed out though, that DOJ spokeswoman Kerri Kupec issued a statement Thursday on voting irregularities: “The Department of Justice pursues all actionable information it receives and, as is always the case, encourages anyone who suspects a federal crime to report it to their local FBI office”.

Dobbs responded to the DOJ’s statement, asking, “Are you kidding me?”

“I’d like to take a moment here to implore Attorney General William Barr, a man of distinction, great service to the country, remarkable talent– to please stand up. Stand up and add your voice to those demanding that the integrity of our elections be protected, and in many states, restored. Such a mission requires the attorney general and the Department of Justice to intervene,” the Fox Business host recommended.

Dobbs added: “Bill Barr is too good a man, too good an attorney general not to be at the forefront of his department’s officials who will work to assure the American people a true and honest election. We are far from that tonight. Mr. Attorney General, I implore you”. Video Below

Lou demands AG William Barr stand up and lead the DOJ and restore the integrity of our elections. #MAGA #AmericaFirst #Dobbs pic.twitter.com/Y3slGOaF4u

On Thursday, Nevada GOP sent a criminal referral to AG Barr regarding at least 3,062 instances of voter fraud:

Our lawyers just sent a criminal referral to AG Barr regarding at least 3,062 instances of voter fraud. We expect that number to grow substantially. Thousands of individuals have been identified who appear to have violated the law by casting ballots after they moved from NV.

MORE: Letter to AG Barr includes +60 pages voter records @NVGOP “We have identified 3,062 individuals who appear to have improperly cast mail ballot in the election. We verified this by cross referencing the names + addreses of voters with National Change of Address database” pic.twitter.com/5V7nOhUrqF

Related: AG Barr Spars With CNN’s Wolf Blitzer Over The Issue Of Mail-In-Voting: “Let Me Talk!”