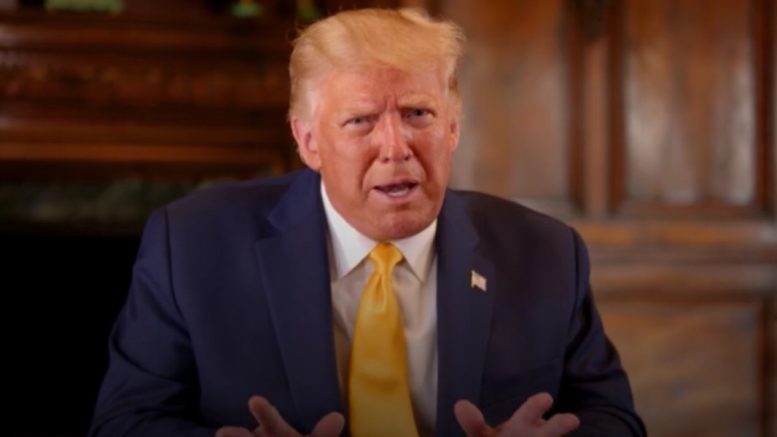 Last August, Wisconsin Assembly Speaker Robin Vos authorized the Office of Special Counsel, headed by retired state Supreme Court justice Michael Gableman, to investigate concerns about election integrity and the 2020 election. Gableman delivered an interim report to the state assembly on November 10, 2021. On March 1st, the special counsel provided a second interim report to the state legislative body, noting the report “is final in the sense that it provides a list of recommendations with time for the Legislature to act before the close of its session in March”, as previously reported by The Freedom Times.

45th President Donald J. Trump issued an email statement on Tuesday congratulating and thanking the state assembly for “standing by” Gableman. He further stated, “Based on the Gableman report, I would imagine that there can only be a Decertification of Electors” in Wisconsin.

“Congratulations and thank you to Robin Vos, Speaker of the Wisconsin State Assembly, and State Assemblywoman Janel Brandtjen, Chair of the Committee on Campaigns and Elections, for standing by highly respected Justice Michael Gableman on the incredible findings just announced on Election Fraud in the great State of Wisconsin. I feel confident that Robin will exercise his moral duty to follow up on Justice Gableman’s findings,” the 45th President said.

“In addition to announcing that they will stay in session and take action to get rid of ERIC and the WEC, which have done some very bad things and made review very difficult (as also noted by the Legislative Audit Bureau), based on the Gableman report, I would imagine that there can only be a Decertification of Electors,” Trump said.

“This is one of the biggest stories of our generation, even though the Fake News Media will try to play it down as much as they can,” he continued.

“Also, this past October the Racine County Sheriff, Christopher Schmaling, referred felony criminal charges against five of the six members of the Wisconsin Election Commission (“WEC”) for their scheme to violate Wisconsin law and allow illegal vote harvesting in nursing homes. The Sheriff stated that the governing ‘election statute was in fact not just broken but shattered’ in all 72 counties across Wisconsin. Read the full story here,” Trump urged. Continued Below

Nearly $9 million in Zuckerberg grant funds directed solely to five Democratic strongholds in Wisconsin violated the state’s election code’s prohibition on bribery. That conclusion represents but one of the many troubling findings detailed in the report submitted by a state-appointed special counsel to the Wisconsin Assembly, Margot Cleveland at The Federalist reported.

They should lock up Mark Zuckerberg and throw away the key. pic.twitter.com/lQxHMI5gPD

“Congratulations and thank you to Robin Vos, Speaker of the Wisconsin State Assembly, and State Assemblywoman Janel Brandtjen, Chair of the Committee on Campaigns and Elections, for standing by highly respected Justice Michael Gableman on the… pic.twitter.com/BjTiYfbcoy

Harrington, also tweeted last week, “Special Counsel Michael Gableman just called for Wisconsin to be decertified”, along with attaching video clips from a hearing held on the Gableman 2020 Election Report.

There are 92,000 nursing home residents in Wisconsin

"In the Zuckerberg 5 cities, in all of those counties those nursing homes reported a voting rate of 100%, anywhere in between 95% and 100%." pic.twitter.com/1rbNZVBM1H

Her healthcare decisions were turned over in 2009

The people responsible for this are DISGUSTING! pic.twitter.com/wx2ScAEmq1

“I guess in my mind I thought if you put your parent in a facility because they were incapacitated, they would not be even offered the vote.” pic.twitter.com/3R0KHFYG91