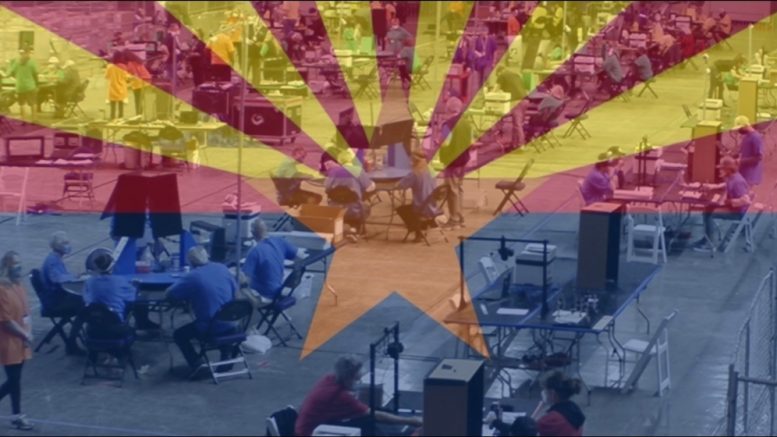 The transcribed version of Knox’s summary can be seen below.

A Summary of the Audit and Canvass Reports

The Maricopa County Forensic Election Audit report was presented by Doug Logan of Cyber Ninjas on 9/24/21. Refer to Volume 3 of the audit report (which you can find at https://www.azsenaterepublicans.com/audit):

The total questionable ballot count from the audit report (more is listed within the report) is:

The primary point mispresented by the Media, Ken Bennet and others was that Biden won since the physical count was essentially the same, showing candidate Biden had more votes. However, this is not supported by the data within the report. The facts from the report and our canvassing report support each other. Due to these significant disparities, the outcome of the election is truly unknowable.

If we presented any particular area as the only discrepancy, it still exceeds the margin of the win.

The Liz Harris Voter Integrity Project canvassed throughout Maricopa County and published the first report on September 8th, 2021. Within this report, they reported two primary categories of ineligible ballots: lost votes and phantom voters. The findings are incredibly close to the machine discrepancy count.

Within this report, almost 12,000 registered voters had been surveyed by her canvassers. The canvass as conducted generally yields a confidence interval of 1.5% at a confidence level of 95%. Said another way, very similar to voting polls, the accuracy of these results applied to the county as a whole is within +/- 1.5% with 95% certainty, which is the scientific, statistical standard for samples such as this.

Lost Votes: These are American citizens living in Maricopa County who cast a vote, primarily by mail, in the election, yet there is no record of their vote with the county, and it was not counted in the reported vote totals for the election.

Ghost Votes: Mail-in votes were cast under the names of registered voters who were either unknown to the residents of the registration address or who were verified as having moved away before October 2020.

There is but one solution that could immediately stop all the fraud and provide cost savings within the process. A single bill to change the election process to the following would remove all threats to our republic.

Demand our elections are fraud-free, and this is the quickest and most affordable method to guarantee your vote counts as much as every voting citizen.

You can access a copy of the canvass report at www.canvas50.org.

Trump to Reporters: ‘A Lot of Things Are Going on in Pennsylvania’ – ‘It Was a Scam’