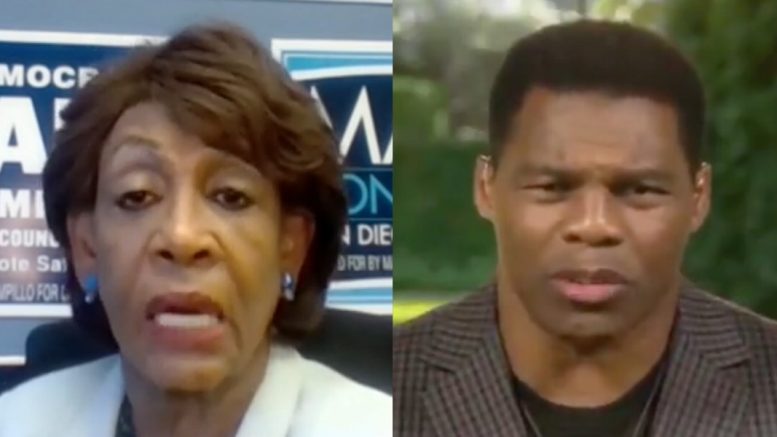 Former running back and Heisman Trophy winner Herschel Walker reacted to comments made by  Rep. Maxine Waters (D-CA) during an appearance on Fox Business’ Varney & Co. on Election Day, after the California Democrat congresswoman announced that she would “never forgive” Black Americans who voted to reelect President Donald Trump.

Earlier this week, Waters told The Joe Madison Show on SiriusXM she was astonished by the prospect of Black voters backing the Commander in Chief.

“For those Black young men who think somehow they can align themselves with Trump, not only are they terribly mistaken … I will never, ever forgive them for undermining the possibility to help their own people and their own communities,” Rep. Maxine Waters said.

“It just hurts me so bad to see Blacks talking about supporting Trump. I don’t know why they would be doing it. I don’t know what’s on their minds,” the California Democrat lawmaker continued.

If black men who cast their ballot for Trump and he gets a second term then “they will go down in history as having done the most despicable thing to their families”, adding, “They will shamefully be accused of having attributed to the lack of equality for life for the people they claim to love so much.”

Herschel Walker reacted to Waters’ comments, suggesting the reason parts of the Black electorate were shifting towards President Trump was because they felt let down by Democratic administrations at both federal and state levels. Continued Below

“I’m gonna respect my elders, but let me be honest here. Isn’t Maxine Waters the one who told people to get up in people’s faces, so she’s inciting violence?” Walker asked.

“Now she is upset that people are starting to educate themselves and see policies that fit them. And yet, her opponent said she [doesn’t] even live in the same district that she represent[s], and she’s living in a million dollar house, when her people in her district are starving. So don’t come here to me with this rhetoric right now,” the Heisman Trophy winner said. Video Below

Rep. #MaxineWaters claims she will "never forgive" Black Trump Voters. What?? @HerschelWalker responds – he says "she's been in office a long time… have you seen her pass any laws for social justice?" #VarneyCo pic.twitter.com/nJtgZILFga

Walker also tweeted the video clip, adding, “Please forgive me for looking out for people of Color & America”.

Please forgive me for looking out for people of Color & America @RepMaxineWaters! @realDonaldTrump @FoxNews https://t.co/brKqPtGj72

(Related: Rep. Clyburn Says He Will ‘Pray’ For Any Black Who Votes For Trump, Herschel Walker Fires Back: “I’m Going To Pray For You As Well”)