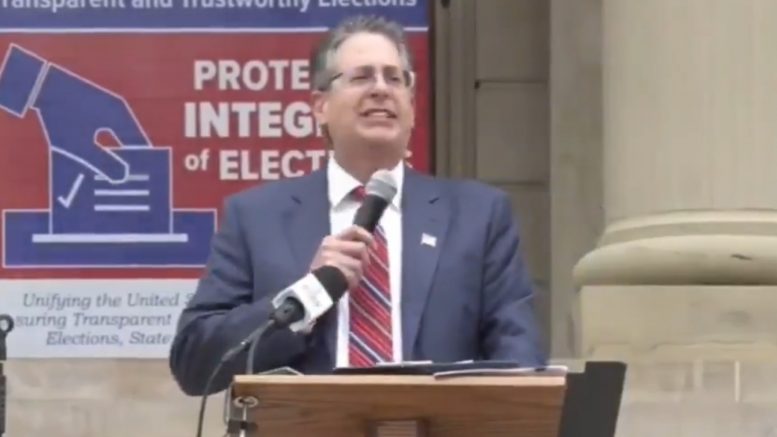 Constitutional attorney Matthew DePerno, who is running for Attorney General in State of Michigan and who is endorsed by 45th President Donald Trump, spoke during an election integrity rally at the Capitol in Lansing, Michigan on Tuesday.

DePerno has exposed evidence of irregularities in Antrim County, MI in the 2020 general election that resulted in nearly 6,000 votes for Joe Biden being returned as votes for Donald Trump, as previously reported by The Freedom Times.

During the rally on Tuesday, DePerno told the crowd in part, “Democrats hate the First Amendment. They hate the assembly that we’re doing today. They hate the free exchange of ideas”.

“Today is about your demand for a full forensic audit in Michigan. And we demand it, because the Michigan Constitution gives us that right,” he explained of the law. “Article 2, Section 4 of the Michigan Constitution — it states that every elector who votes, everyone in the State of Michigan who’s qualified to vote, shall have the right to conduct an audit of the statewide election.”

“It doesn’t say ‘maybe’. It doesn’t say ‘if you ask permission’. In fact, later on it states that this is a self-executing right. That means you don’t need permission from the government,” DePerno noted.

45th President Donald Trump had issued a statement on October 8th via email, urging “anyone who cares about our Great Country should attend because unless we look to the past and fix what happened, we won’t have a future or a Country.”

"Today is about your demand for a full forensic audit in Michigan. The Michigan constitution gives us that right.

"It doesn't say maybe, it doesn't say if you ask permission…it is a self-executing right…you don't need permission from the government." – @deperno4mi

"Big Michigan Rally coming up on Oct. 12th, on the Capitol steps in Lansing, where Patriots will demand a Forensic Audit of the 2020 Presidential Election Scam. The Voter Fraud is beyond what anyone can believe. Anyone who cares about our Great Country should attend… pic.twitter.com/QAFdxQDUhQ