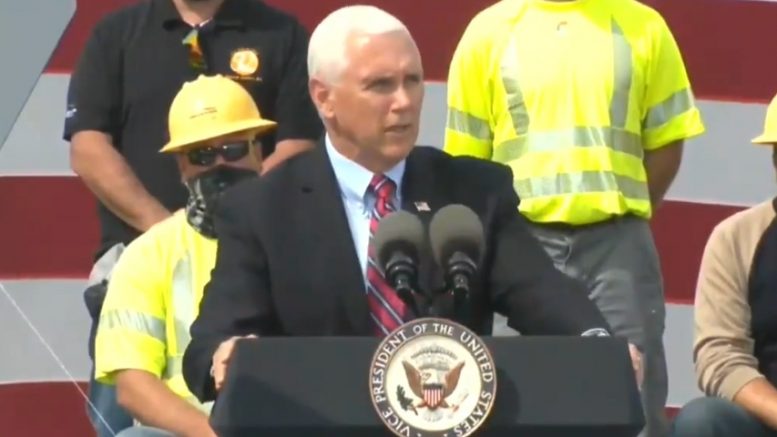 During his speech in La Crosse, Wisconsin on Monday, Vice President Mike Pence promised that under four more years of President Trump, “we will have law and order in every city of this country for every American.”

The remarks by Pence came in relation to violent anti-police protests and looting that have taken place in Democrat-controlled cities over the past several weeks.

“Throughout all of the last three amd a half years, this President and this administration have stood with the men and women of law enforcement, and we will stand with them every day,” Pence said.

“To be clear, any incident involving the police use of force will always be thoroughly investigated, but there is no excuse for the rioting and the looting that we have seen in Kenosha and in cities across the country,” he continued. “And this violence against civilians, against property, and against law enforcement must stop and it must stop now.”

“President Trump and I will always support the right of Americans to peaceful protest, but rioting and looting is not peaceful protest,” Pence said. “Burning businesses is not free speech, and those who do so will be prosecuted to the fullest extent of the law.”

Then after mentioning how President Trump sent in 200 law enforcement officers into Kenosha to help quell the violence, Pence declared, “Under this President I promise you, we will have law and order in every city in this country for every American of every race and creed and color, so help us God.” Video Below

Vice President Mike Pence: “we will have law and order in every city in this country for every American”https://t.co/VkWFO0ap6H pic.twitter.com/NK8VuydJ13

Lou Dobbs On Rep Nadler: “Who The Hell Does He Think He Is Issuing An Invitation To The President” To The Impeachment Hearing