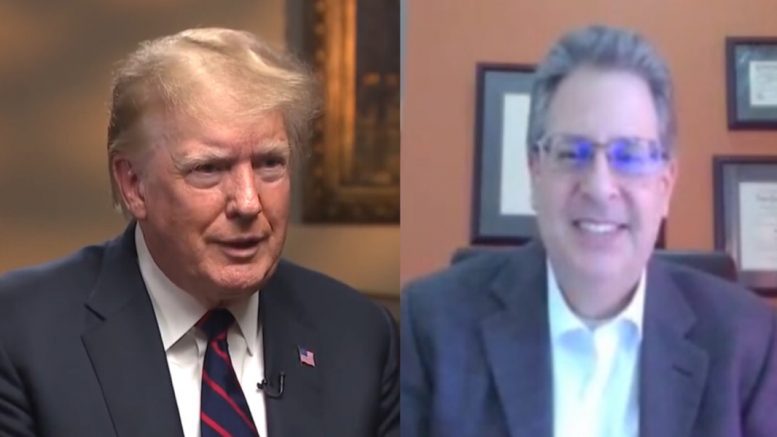 45th President Donald J. Trump issued a statement Thursday via email from his “Save America” PAC announcing his “Complete and Total Endorsement” for “Super Lawyer Matthew DePerno [who] is running for Attorney General in the Great State of Michigan”.

In November 2020, Antrim County resident, William Bailey, hired Matthew to represent him in his lawsuit against Antrim County and the Michigan Secretary of State’s office, to conduct his own audit of the November general election irregularities in Antrim County. Matthew and his team were able to capture forensic images of the Dominion Voting machines. Since that time, they have conducted forensic analyses of those images to fully understand what went wrong in Antrim County prior to, during, and after the 2020 general election. Matthew has published 21 legal reports based on his findings from the forensic audit, according to DePerno’s campaign website.

In a statement on Thursday, President Donald Trump said of Matthew DePerno:

Super Lawyer Matthew DePerno is running for Attorney General in the Great State of Michigan. He has defended the Constitution for 20 years, and has been on the front lines pursuing fair and accurate elections, as he relentlessly fights to reveal the truth about the Nov. 3rd Presidential Election Scam.

Dana Nessel, the Radical Left, and the RINOs are targeting Matt because he gets results and has exposed so much Voter Fraud in Antrim County, and many more places, in the 2020 Election. He will never give up, and that’s why they absolutely cannot stand him!

Matt will properly enforce the laws for everyone—unlike what the out-of-control Radical Left Prosecutors are doing now. He will always defend our under siege Second Amendment, loves our Military and our Vets, and will restore Law and Order in the face of rampant and record-setting crime in Michigan. Matt DePerno has my Complete and Total Endorsement. He will never let you down! Continued Below

Mr. DePerno responded to Trump’s announcement, expressing that is “an absolute honor to have the blessing and full endorsement of the 45th President!”

An absolute honor to have the blessing and full endorsement of the 45th President! #DePerno4MI #AmericaFirst 🇺🇸 https://t.co/ckY7d5KaRU

In December, a judge in Michigan permitted parties in a court case to release the results of a forensic imaging examination of Dominion Voting Systems machines, with redactions of code. 13th Circuit Judge Kevin Elsenheimer agreed to remove a protective order that was blocking the release of the report on the request of attorney Matthew DePerno, as previously reported by The Freedom Times.

“Significantly, the computer system shows vote adjudication logs for prior years; but all adjudication log entries for the 2020 election cycle are missing. The adjudication process is the simplest way to manually manipulate votes. The lack of records prevents any form of audit accountability, and their conspicuous absence is extremely suspicious since the files exist for previous years using the same software,” the report, authored by Russell Ramsland, states.

“These errors resulted in overall tabulation errors or ballots being sent to adjudication. This high error rates proves the Dominion Voting System is flawed and does not meet state or federal election laws,” Ramsland added. “Because the intentional high error rate generates large numbers of ballots to be adjudicated by election personnel, we must deduce that bulk adjudication occurred. However, because files and adjudication logs are missing, we have not yet determined where the bulk adjudication occurred or who was responsible for it. Our research continues.”

For months, Matthew has tried to take his findings to the Michigan Legislature, asking for their support in demanding a Statewide full forensic audit, to no avail. Michiganders deserve more from their elected officials, and as American Citizens, our constitutional right to ensure fair, free, and secure elections. Matthew has been attacked many times from elected officials, including Dana Nessel, but he has not backed down.

Matthew is committed to conducting a full forensic audit in Michigan and as Michigan’s Attorney General he will hold those responsible for voter fraud accountable.  He is committed to ending government lock downs and mask mandates. As Attorney General, Matthew will fight to protect the civil liberties of all Michigan residents, state’s sovereign rights, and return us to our Founders’ concept of a Constitutional Republic.