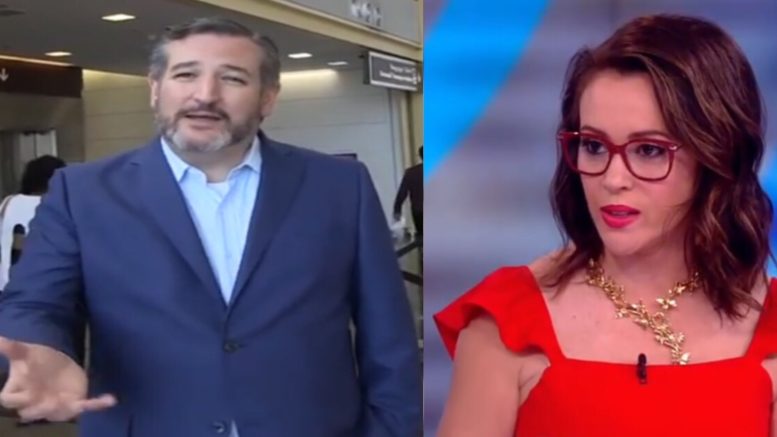 On Sunday, The Freedom Times reported that Actress Alyssa Milano tried to argue with a Twitter user who said no gun control solutions will stop someone with “evil intent” and considered the right to own a gun is “God-given.”

Milano accused the user of belonging to the “gun lobby” and asked, “Can someone cite which passage of the Bible God states it is a god-given right to own a gun?” However, Senator Ted Cruz (R-TX) had no problem answering Milano’s question as he responded with a thorough, 10-part tweet.

Following a back and forth on Twitter between Sen. Cruz and Milano pertaining to “gun control solutions”, the actress took to Twitter on Monday by announcing that she would “love” to meet with the Texas Senator to debate.

Milano wrote, “I’d love to come in and meet with you on the gun issue and many other issues that include life, liberty and the pursuit of happiness, @tedcruz and also, 1 Peter 4:8. I’ll be in DC next week. We can live-stream the meeting so the American people can hear your bullshit 1st hand.”

Cruz accepted her request and kindly responded, “I’d be happy to sit down & visit next week about uniting to stop gun violence & about the Constitution. If we can have a civil & positive conversation—in the spirit of 1 Peter 4:8 as you suggest—despite our political differences, that might help resolve the discord in our Nation.”

On Wednesday, Milano formally announced that she will, in fact, meet with Sen. Ted Cruz while she will be in D.C. (Continued Below)

Milano tweeted, “I’ll be meeting with @tedcruz on Tuesday about guns. We don’t agree on this issue. But if we can talk with mutual respect & humility, maybe all of us come together to effect positive change. I will enter this with an open heart, ears and mind. I hope he does the same. #NoRA.”

Sen. Cruz confirmed the meeting and expressed, “I’m looking forward to it! And if all of us can together have more positive, civil discussion & debate on the substantive issues of the day, that would go a long way to helping unite and heal our divided Nation.”

Further, TMZ caught up with the Texas Senator where he reacted after Milano announced her planned meeting with him. (Continued Below)

“There is so much anger and bitterness and divisiveness, it’s not good for our country. And I think there are too many people in Hollywood that are spreading that rage,” Cruz explained.

“We need to be coming together, we need to be looking at common-sense solutions to stop violent felons, but too many left-wing Democrats, too may Hollywood celebrities try to… listen there’s a nastiness. Twitter [and] Hollywood hates Donald Trump so much that the only way they engage is rage and insults. That hatred is counterproductive to who we are,” he said.

(Related: Chicago’s Mayor Calls Cruz A ‘Coward’ For Not Embracing Gun Control, Cruz Schools Her: ‘Mayor, Your Anger Is Misplaced’)

Asked about his upcoming meeting with Milano, Cruz said, “Well, she said she was coming to D.C. next week, and she said she wanted to sit down and talk about how to solve these problems. I think she didn’t imagine there was any world in which I’d say, ‘Yes.’ And I said, ‘Look, I’m more than happy to sit down and listen to what you have to say’, and have what I hope will be a civil and respectful conversation.”

“If it’s screaming, cursing and yelling like we see on Twitter all the time, that won’t be a good thing. But if we have a positive conversation, maybe that can help heal some of the divisive energy. I’m looking forward to meeting. We obviously have very different political views, but if we can actually speak respectively and positively, that will be a good thing. So I hope that’s what we see,” he added. (Video Below)

I’m looking forward to it! And if all of us can together have more positive, civil discussion & debate on the substantive issues of the day, that would go a long way to helping unite and heal our divided Nation. https://t.co/HCpLepcohv