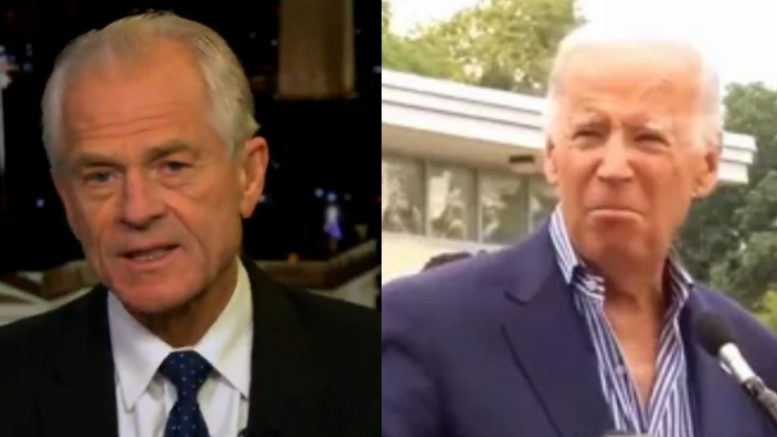 Director of the Office of Trade and Manufacturing Policy Peter Navarro thinks that the United States can not and should not inaugurate Joe Biden as it’s next President on January 20, 2021, especially due to the fact that public opinion polls indicate that a large segment of Americans believe that the 2020 election was stolen from President Donald Trump.

Navarro gave the assessment while interviewing with Newsmax on Friday, just hours after he released a 36-page report alleging that there was “more than sufficient” election fraud uncovered to swing a victory to President Trump.

According to The Washington Examiner:

The 36-page report released by Navarro “assesses the fairness and integrity of the 2020 Presidential Election by examining six dimensions of alleged election irregularities across six key battleground states” and concludes that “patterns of election irregularities … are so consistent across the six battleground states that they suggest a coordinated strategy to, if not steal the election, strategically game the election process in such a way as to … unfairly tilt the playing field in favor of the Biden-Harris ticket.”

You can read Navarro’s full report by CLICKING HERE. Continued Below

While speaking to Newsmax’s Greg Kelly on Friday afternoon, Navarro declared, “We can not as a nation, which is supposed to have the greatest democracy in world history — we can’t inaugurate an illegal and illegitimate president that public opinion polls show, think that a large segment of this country thinks that he stole the election. We can’t go there.”

“So, what we need to do, I’ve recommended a special prosecutor be appointed forthwith,” he continued. “I’ve recommended that Georgia, which is a cesspool of these election irregularities, postpone that [runoff] election from January 5th to the end of February so we can get them to stop doing what they’re doing.”

Peter Navarro tells @gregkellyusa "we cannot as a nation inaugurate an 'illegitimate' President that a large segment of this country think 'stole' the election." https://t.co/VlT7z8drtO pic.twitter.com/WNwVWTSpzz