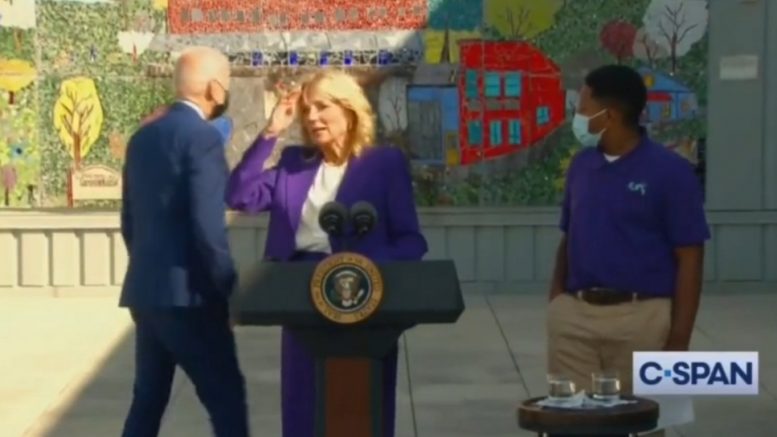 Joe Biden was caught on camera wandering away from his wife, Jill Biden, as she delivered a speech at a Washington D.C. middle school.

The awkward moment unfolded just seconds after Jill stepped up to the podium and began speaking.

Related Article: Gov. DeSantis Responds To Biden’s ‘Governor Who?’ Remark: “I’m Not Surprised… What Else Has He Forgotten?”

Biden is seen on camera blocking the sun from his eyes as he looked into the crowd, then turning and slowly strolling away behind Jill and out of the camera’s view.

He then reappears moments later and stands in his initial position next to his wife. It’s unclear in the video why he ventured off.

As the video circulated, social media users had fun trying to figure out what could have caught Joe’s attention to make him wander away, as one person posted a video meme suggesting it could have been the sound of an ice cream truck.

When you hear that oh so familiar sound 🎵🎶 pic.twitter.com/8TQkDG912m

Doocy to Jean-Pierre on why Psaki Said ‘Crime is a Huge Vulnerability for Dems’: ‘I Don’t Agree With Your Characterization of What she Actually Said’