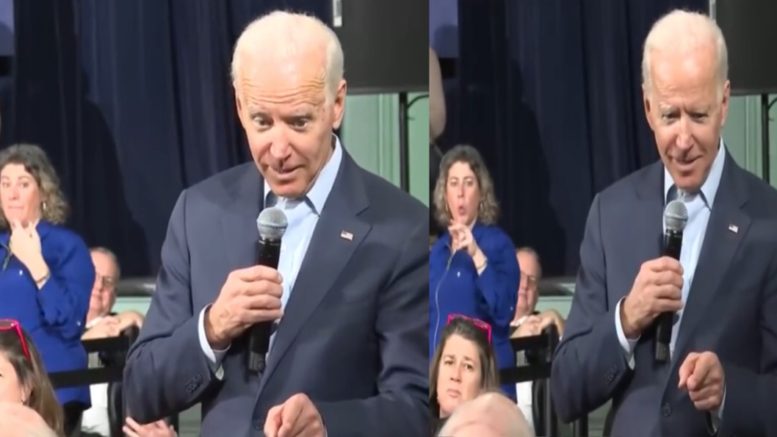 A video clip surfaced on Twitter Thursday of Democratic presidential candidate Joe Biden, asking a girl how old she was at a campaign rally in Exeter, New Hampshire on Monday.

As previously reported by The Freedom Times, Biden, on Sunday, had told a girl in the audience during a campaign event in Peterborough, New Hampshire to “come up and talk to him” and “anyone under 15, you get something special today.”

On Monday, The Freedom Times reported, of Joe Biden being interrupted by a protestor who yelled, “You touch kids on video and women. We don’t need another old white man running for President.”

During that same event, Biden was filmed telling a young girl in the audience that she would get “something special” for attending. (Continued Below)

“I want to start off by thanking everyone under the age of 15. We owe you big kiddo; I don’t know how you got here. But thank you, thank you, thank you,” Biden had told the young girl on Sunday. “After it’s over, come up and talk to me for a minute, okay? Promise, alright? Anybody under 15, you get something special today. Because I gotta tell you, this has got to be boring, boring, boring for you.”

At another rally on Monday in Exeter, New Hampshire, Biden asked a girl in the audience how old she was.

Afterward, he shook a little boy’s hand, asked his name, then told the boy, “This is like going to a real long, long church service. You’re a really good boy and you got caught in the front pew.”

Biden didn’t ask the boy to talk to him though, after the event.

Official remarks by Joe Biden to a girl in the audience in Exeter, New Hampshire:

(Related: Biden Calls Audience Member A ‘Damn Liar’, Challenges Him To Do ‘Push-Ups Together’ & Take An ‘IQ Test’)