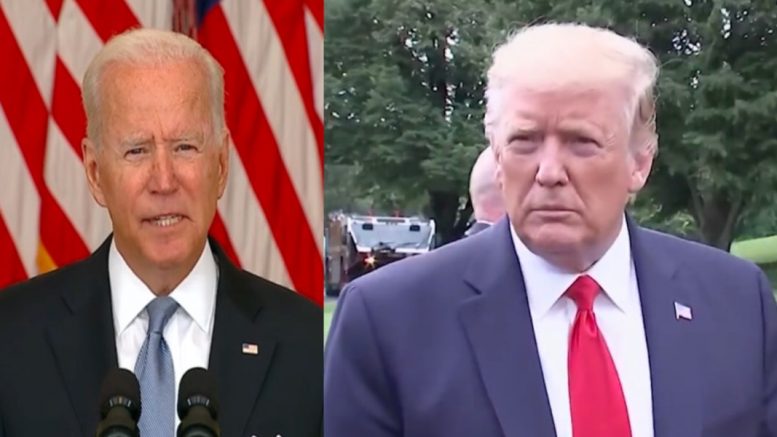 78-year-old Joe Biden returned to the White House from Camp David on Monday amid growing pressure to address the nation over the collapse of Afghanistan, saying he stands “squarely behind” his decision to withdraw U.S. troops from Afghanistan after having a presence for 20 years, while placing blame on the Afghan leadership for the country’s plight and claiming that Afghan President Ashraf Ghani had refused advice to negotiate and erroneously insisted Afghan forces would fight.

While reading prepared remarks on a teleprompter, Biden said in part, “I stand squarely behind my decision. After 20 years, I’ve learned the hard way, that there was never a good time to withdraw U.S. forces.”

Democrat career politician Joe Biden also refused to take responsibility over the events that unfolded and went on to blame former President Trump for his 2020 agreement with the Taliban, which would have seen a withdrawal of U.S. troops from the country by May 1, 2021.

Biden said he had to either follow through with the agreement or risk “escalating the conflict and sending thousands more U.S. forces lurching back into the third decade of conflict.”

“[U.S.] leaders were told by the military it would take no time at all for the Taliban to take everything,” an anonymous U.S. intelligence official told ABC News. “No one listened.” Continued Below

45th President Donald J. Trump reacted to Joe Biden’s remarks in a statement via email from his “Save America” PAC, saying, “It’s not that we left Afghanistan. It’s the grossly incompetent way we left!”

On Sunday, Trump also called for Joe Biden to “resign” following the swift takeover of Afghanistan by Taliban militants.

“It is time for Joe Biden to resign in disgrace for what he has allowed to happen to Afghanistan, along with the tremendous surge in COVID, the Border catastrophe, the destruction of energy independence, and our crippled economy,” Trump demanded. “It shouldn’t be a big deal, because he wasn’t elected legitimately in the first place!”

Just over one month ago, Biden said in a press conference that it was “highly unlikely” that the Afghan government would fall to the Taliban after the U.S. left and denied that he had been briefed to that effect.

Biden did not take any questions after addressing the nation on the situation in Afghanistan, instead ignoring the shouts of reporters as he exited the stage before returning to Camp David.

The White House said that the president will now return to Camp David after his remarks, having only spent about less than four hours back in Washington, Fox News reported.

Sir.. Sir people are falling off the wings of departing airplanes. Sir… pic.twitter.com/kGaDomF3ua

Biden is immediately heading back to Camp David.

He isn't staying at the White House. pic.twitter.com/PDfNg9hDUK

Earlier in the day, “White House talking points” over Afghanistan were reportedly “being circulated to Dem offices” by Nancy Pelosi’s office.

Some White House talking points re: Afghanistan being circulated to Dem offices by the Speaker’s office (sent around noon), per 2 sources pic.twitter.com/e0vAPFwOFj