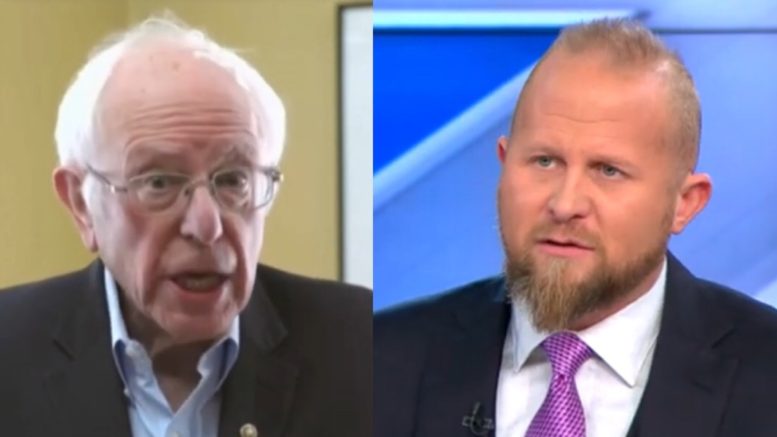 Brad Parscale, President Donald Trump’s 2020 campaign manager, took to Twitter on Wednesday to release a statement after Senator Bernie Sanders (I-VT) announced that he was giving up on the 2020 presidential race.

Sanders told his followers that he is leaving the campaign trail in a live stream Wednesday, paving the way for former Vice President Joe Biden to become the presumptive 2020 Democratic nomination.

“With Bernie Sanders suspending his campaign, it’s all but official that the Democrat establishment got the candidate they wanted in Joe Biden, as well as the candidate President Trump will destroy in November.

President Trump is still disrupting Washington, DC, while Biden represents the old, tired way and continuing to coddle the communist regime in China.

Democrat elites shoved Bernie Sanders to the side for a second time, leaving many of his supporters looking for a new home.”

(Related: Bernie Sanders Suggests He Should ‘Get The Hell Out Of Politics’ If He ‘Can’t Win An Election’ On His Ideas)

President Trump also took to Twitter Wednesday, following Sanders’ announcement by writing: “Bernie Sanders is OUT! Thank you to Elizabeth Warren. If not for her, Bernie would have won almost every state on Super Tuesday! This ended just like the Democrats & the DNC wanted, same as the Crooked Hillary fiasco.”

“The Bernie people should come to the Republican Party, TRADE!” President Trump declared. Continued Below

With Bernie Sanders suspending his campaign, it’s all but official that the Democrat establishment got the candidate they wanted in Joe Biden, as well as the candidate President Trump will destroy in November.@TeamTrump statement: pic.twitter.com/dRxVhjHL8E

Parscale also tweeted an ad from the Trump campaign that explains how Biden and Sanders agree on some of the big issues:

With Bernie suspending his campaign, it’s clear that the Dem establishment got the candidate they wanted in Sleepy Joe.

But Biden & Sanders agree on all the big issues.

They are both the same. pic.twitter.com/tMFahze6D6