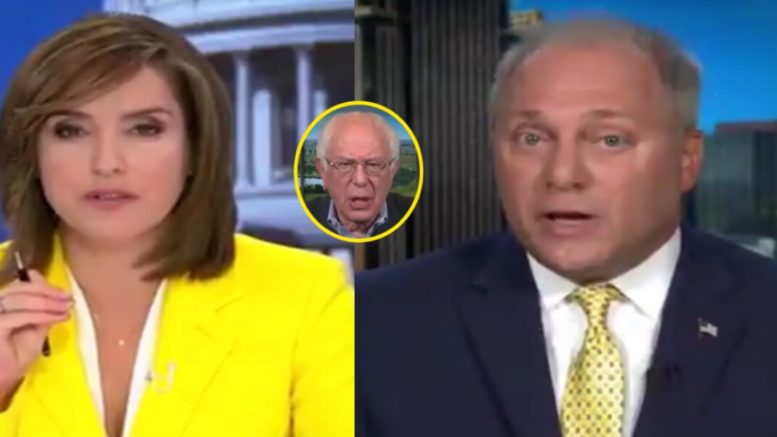 House Republican Whip Steve Scalise (R-LA) turned the tables on Democrats Sunday during an interview on CBS’s “Face The Nation” after they suggested President Trump’s rhetoric is linked to the attacks in El Paso, Texas.

President Trump has repeatedly denounced all forms of hatred and racism, including white supremacists, but the leftwing media and Democratic lawmakers will have you believe otherwise.

“To try to assign blame to somebody else is a very slippery slope because the President is no more responsible for that shooting as your next guest Bernie Sanders is for my shooting,” Steve Scalise said on Sunday after he was asked about the President’s “language.”

The Louisiana Republican was referring to the massacre in an El Paso Walmart last Saturday and a shooting in 2017 in which a gunman — who authorities later surmised was fueled by “rage against Republican legislators” — critically wounded Scalise and others while they were practicing for a congressional baseball game, as reported by CBS.

After the gunman in El Paso, identified as a 21-year-old white man, stormed the crowded Walmart, Democrats denounced the president’s hardline and inflammatory rhetoric on immigration, which they said fans the hatred behind violent acts like the mass shooting in the Texas border city, according to CBS.

“And [Trump’s] not responsible, by the way, the shooter is responsible. What we need to do is find out those people who have slipped through the cracks, and we’ve seen it in shooting after shooting. He had a hit list, a rape list, and yet, none of that was in the system. Let’s make sure these background systems work properly and are rooting out the people that shouldn’t be able to legally purchase a gun, but currently are because the system hasn’t worked,” Scalise said. (Continued Below)

“Joe Biden just said that he was Vice President when the Parkland kids came and met with him. He wasn’t Vice President [at that time.] Some of these things that are being said are beyond ridiculous. I know they’re running for President, they might not like Donald Trump’s views but stop this ridiculous assessment of blame to somebody other than the person who’s responsible,” Scalise continued.

“You talk to other people who were motivators– look at the Dayton shooter, what his motivations were. Is anybody asking about that, anybody from the left who he was inspired by? There’s no place for it. The shooter is responsible, let’s try to identify these shooters in a better way, which right now we’re working on doing. Let’s put more emphasis there,” he insisted. (Videos Below)

.@SteveScalise says it’s a “slippery slope” to blame @realDonaldTrump's rhetoric for the El Paso shooting: "The president's no more responsible for that shooting as your next guest, Bernie Sanders, is for my shooting.” pic.twitter.com/ef112WRS4S

On 2020 candidates connecting Trump’s rhetoric to the El Paso shooter @SteveScalise says they should stop “this ridiculous assessment of blame to somebody other than the person who's responsible” pic.twitter.com/IwYbI1qlTF

Bernie Sanders was the next guest on “Face on Nation” and he claimed President Trump “creates the climate” [of hate] but does not think the President wants to see people shot.

When asked if he thinks @realDonaldTrump is responsible for the El Paso shooting, @BernieSanders says the president “creates the climate, but do I think that he wants to see somebody get shot? Absolutely not.” pic.twitter.com/CTSWkD5E3a

Is this creating a “climate of hate” by attacking the President to rally his base? Here are a few examples from Bernie Sanders:

We have president who is an overt racist and xenophobe.

He should stay away from El Paso.

What he should do right now is end his anti-immigrant rhetoric.

Most of my father’s family was brutally murdered at the hands of Hitler’s white supremacist regime—a regime which came to power on a wave of violence and hatred against racial and religious minorities.

We cannot allow that cancer to grow here.

My father was an immigrant who came here at 17, without a nickel, and knew no English.

That is the story of my family and the story of America—but it is a story that is now under attack by xenophobic demagogues like Trump.

We're going to defeat his hatred.

(Related: Five Years After Ferguson, Warren Says Michael Brown Was ‘Murdered’; Brit Hume Levels Her: ‘Not Even Obama’s DOJ Concluded There Was Murder’)