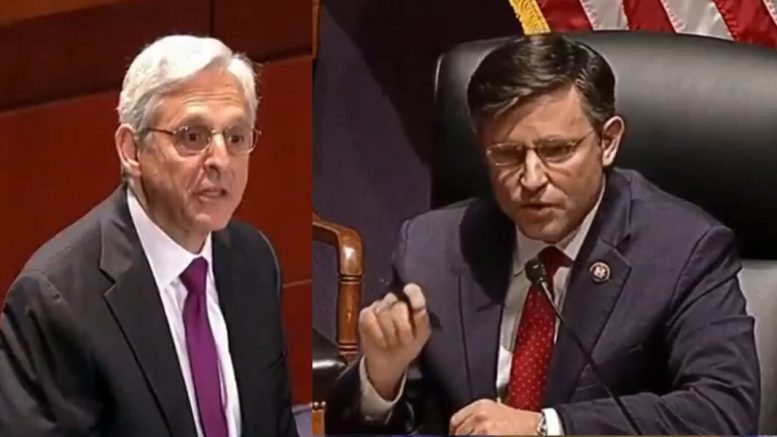 Garland, however, refused to say whether he requested ethics guidance concerning his son-in-law’s business – which pushes critical race theory-related ideas and provides services to school districts nationwide – before he issued a memo this month, which said the FBI will investigate threats by parents against school board members.

Attorney General Garland was asked by Rep. Johnson to address the conflict of interest concerns regarding his son-in-law’s company, Panorama Education, a technology company that endorses the type of left-leaning ideas that parents have opposed in school districts across the U.S.

The company was reportedly paid at least $27 million from as many as 1,500 school districts across the country since 2017, raising questions about how much Garland’s family stands to benefit from law enforcement cracking down on school board opposition, Fox News reported.

Johnson asked Garland whether he sought ethics guidance concerning his son’s business before he sent out his controversial October 4 memo, which directed the FBI and U.S. attorney offices to hold meetings with federal, state and local law enforcement leaders within 30 days to discuss ways to combat what the DOJ described as an “increase in harassment, intimidation and threats of violence against school board members, teachers and workers in our nation’s public schools.”

Rep. Johnson told Garland, “The question is the thing that is concerned many of those parents that are showing up at the school board meetings, the very basis of their objection and their vigorous debate, as you mentioned earlier, is the curricula, the very curricula that your son-in-law is selling.” Continued Below

“An employee of the executive branch is discouraged from engaging in conduct that’s likely to affect the financial interest of someone close to them,” Johnson said. “Your son in law, your daughter, clearly meets that definition. So the question is, did you follow that regulation? Did you have the appropriate agency ethics official look into this? Did you seek guidance as the federal regulation requires?”

The attorney general deflected from Rep. Johnson’s question, saying that the memo targets threats of violence against school officials.

“This memorandum is aimed at violence and threats of violence,” Garland responded. Continued Below

“Did you seek ethics counsel before you issued a letter that directly relates to the financial interest of your family? Yes or no?” Rep. Johnson asked.

“This memorandum does not relate to the financial interests of anyone,” Garland said.

“I take that as a no,” Rep. Johnson replied.

Garland also refused to say whether he would consider submitting to an ethics review.

(Related: AZ’s AG Puts Merrick Garland In Check: “Arizona Will Not Sit Back & Let The Biden Admin. Abuse Its Authority”)