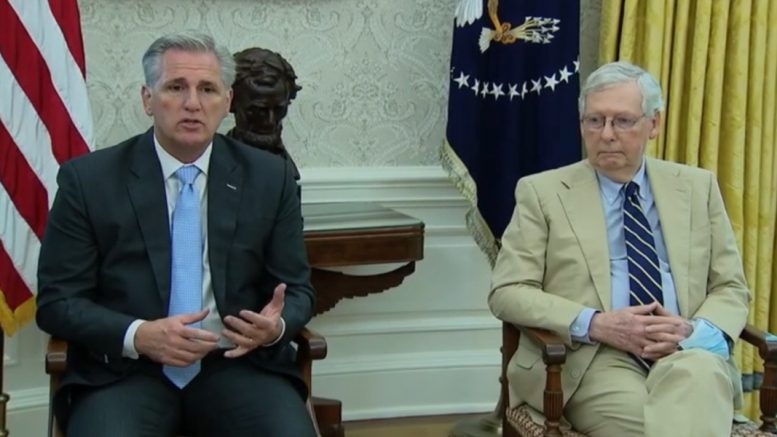 A group of 27 Pennsylvania Republican lawmakers on Wednesday, wrote a letter to Senate Majority Leader Mitch McConnell (R-KY) and Rep. Kevin McCarthy (R-CA), demanding the GOP leaders reject the Pennsylvania election results until an investigation is conducted into the numerous claims of fraud before the results are officially certified.

The group of Pennsylvania lawmakers consisting of eight Pennsylvania state senators and 19 state representatives wrote in their letter that their effort has “nothing to do with overturning any election results, but rather ascertaining if the allegations of fraud corrupted the outcome of the vote.”

“There are simply too many questions that remain unanswered to say that the results can be trusted and therefore the certification is premature, and the results must be disputed until an investigation is completed,” wrote the group of Pennsylvania lawmakers in part.

Key allegations include statistical anomalies in votes, witnesses claiming interference with poll watchers’ ability to do their jobs, delays in opening or closing polling locations on Election Day, illegal ballot harvesting, improper ballot “curing,” lapses in chain of custody of ballots and election materials, and outright submission of fraudulent ballots, as noted by the Epoch Times.

The lawmakers also claimed a “massive vote deficit” in Pennsylvania, alleging that over 200,000 more votes were counted than the total number of voters who voted in the November 3 election, proving a reference to a recent statement put out by a group of Pennsylvania lawmakers on Monday, who compared Department of State records to DoS/SURE system records in claiming this discrepancy.

“These numbers just don’t add up, and the alleged certification of Pennsylvania’s presidential election results was absolutely premature, unconfirmed, and in error,” the lawmakers stated in a press release. Continued Below

Congress is set to certify the results of the 2020 presidential election next week on January 6. The Electoral College vote makes the result official, unless Congress blocks the January 6 count. Under an 1887 law, a congressman and a senator together can submit written objections to a state’s vote count.

Dozens of Republican members in Congress plan to object the electoral results on January 6., along with Senator Josh Hawley (R-MO). Continued Below