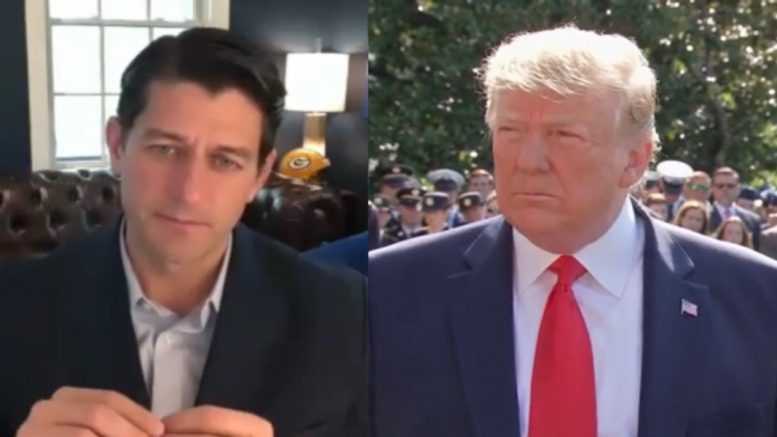 45th President Donald J. Trump issued a statement via email from his “Save America” PAC on Wednesday, calling out Fox News for “not covering the 2020 Election Fraud”, speculating that “People have turned them off!”

“Fox doesn’t understand that it is missing a rating bonanza by not covering the 2020 Election Fraud, the Crime of the Century, which is being exposed throughout many states on a daily basis,” 45th President Donald Trump said in a Wednesday statement.

“They are also doing a disservice to our Country. People have turned them off!” he speculated.

In May, President Trump lambasted former Republican House Speaker Paul Ryan, who joined the Fox Corp. board after he left office. “It was the day that Ryan went on the board of Fox (Fox will never be the same!) that Fox totally lost its way and became a much different place, with millions of its greatest supporters fleeing for good. Paul Ryan has been a curse to the Republican Party,” the former president said in a statement.

“He has no clue as to what needs to be done for our Country, was a weak and ineffective leader, and spends all of his time fighting Republicans as opposed to Democrats who are destroying our Country. As a Republican, having Paul Ryan on your side almost guarantees a loss, for both you, the Party, and America itself!” he added. Continued Below

Liz Harrington, Trump’s spokesperson, pointed out on Sunday that Fox News had edited a portion of Bongino’s phone interview with the 45th Commander in Chief and posted the president’s remarks to Twitter.

In a statement, Harrington wrote on Twitter: “Fox News DELETED President Trump’s words: ‘You have a Fake Election, you have an election with voter abuse and with voter fraud like nobody has ever seen before and based on that and based on what happened they are destroying our Country…’ This is just as bad as Big Tech. They are putting President Trump’s honest statement, and the concerns of tens of millions of Americans, down the Memory Hole.”

“This had nothing to do with @danbongino, the interview happened to be on his show. Dan is a great friend of America First. It was @FoxNews who cut out President Trump’s statement about the Fake Election, just like they have cut out coverage of election fraud ever since,” Harrington added. Video Below

And here is what Fox News posted to YouTube: pic.twitter.com/P7B6Otbv4S

"That is not acceptable to me."

Meanwhile, MyPillow CEO Mike Lindell on Tuesday launched his three-day Cyber Symposium with an all-out assault on Fox News for its lack of coverage of his event, during which he says he will present evidence of a Chinese hack of the 2020 presidential election. Fox News is not covering Lindell’s “Cyber Symposium”.