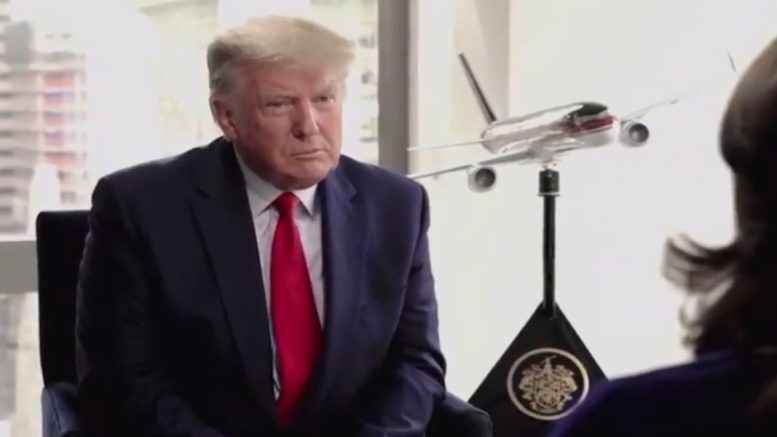 Former President Donald Trump sat down with Chanel Rion Thursday for an interview, telling OAN’s chief White House correspondent that he will hold campaign-style rallies in four battleground states in the coming weeks.

The 45th President was also asked if he “plans to take back the White House in 2024”, and who he would pick for his vice president.

“We’re doing very well now in getting good people into office with the endorsements. They’re winning– every single person that I’ve endorsed– virtually, is winning. And it’s stronger now than ever before,” the former president said.

“A lot of the cut and success of the country is really gonna have to do with immediacy, because by the time we get to 2022, they’re gonna have everything done– the way they’re putting things through Congress. [Sen. Mitch] McConnell can’t stop anybody,” he explained.

“If something doesn’t happen fast, you know, this is before 2022. I’m saying before 2022, something has to be done, because you’ll get to 2022, and this will already be done. And you’re not going to be able to change it very easily,” Trump revealed.

Asked who he would pick for his vice president, President Trump said, “There’s so many capable people. They’re great, and I think almost all of them are on my side. And many of them said if I ran, would never run, which is a great sign of respect, which I appreciate. They don’t have to do that, but they have certainly said it. I’m going to make a decision at the right time and I’ll let you know.” Continued Below

President Trump also announced that he will be hosting rallies in Florida, Ohio, Georgia, and North Carolina.

@ChanelRion asked POTUS about running in 2024 and he said “I’m saying before 2022, something has to be done.”
He also announced that he will be hosting rallies in FL, OH, GA and NC. Will be announced “very, very shortly”.pic.twitter.com/8cPI8ZKn7u