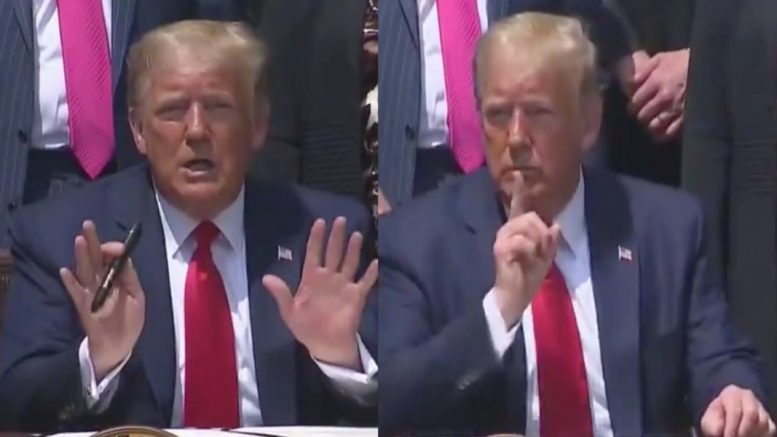 Friday, the Commander in Chief held a news conference in the Rose Garden at the White House on jobs numbers amid the U.S. unemployment rate dropping to 13.3 percent in May, down from a record high in April, indicating the nation’s economy is recovering faster than expected from the coronavirus lockdown.

The Labor Department said in its Friday report that employers added a stunning 2.5 million jobs in May — the biggest increase on record. The economy shed a combined 22.1 million jobs in April and March, meaning there are an estimated 21 million Americans currently out of work, Fox Business reported.

The jobless rate dropped from 14.7 percent in April, which was the highest level ever since record-keeping began in 1948. The surprise decline, combined with the surge in jobs, suggests the worst is over for the nation’s economy as states ease stay-at-home guidelines and businesses bring back staff, per Fox Business.

“I am so stunned. I’ve never seen numbers like this and I’ve been doing this for 30 years! Steve M. @MariaBartiromo. This is an AMAZING JOBS REPORT! Edward Lawrence @FoxNews”, he tweeted. Continued Below

During Friday’s news conference, the president said, “We are gonna be stronger than we were, when we were riding high. And our stock market is almost, it’s just short of an all time high. … It’s gonna be stronger than last time. … I think it’s going to be a phenomenal next year. … The best numbers are yet to come.”

The president also signed legislation to make changes to the PPP that “will especially help restaurants, hotels and other businesses that have been very hard hit by the virus.”

The measure eases the conditions small businesses have to meet in order to get the Paycheck Protection Program loans forgiven, as some struggled to meet key thresholds during the pandemic, as per CNBC. Video Below

While the president was signing the bill that will ease guidelines on coronavirus relief loans for small businesses, reporters at the news conference, however, kept shouting questions at the president.

Only our media, who has been fighting to keep our country closed, could find negative things to say when the market is surging and the economy is showing signs of recovery after a pandemic. pic.twitter.com/0C6QtfFbNy

PBS’ Yamiche Alchindo proudly tweeted what she had tried to ask the president while he asked the press to let him sign the bill first.

His response to me: “You are something.”

(Related: Biden Suggests The Crisis Is An ‘Incredible Opportunity…To Fundamentally Transform The Country’)