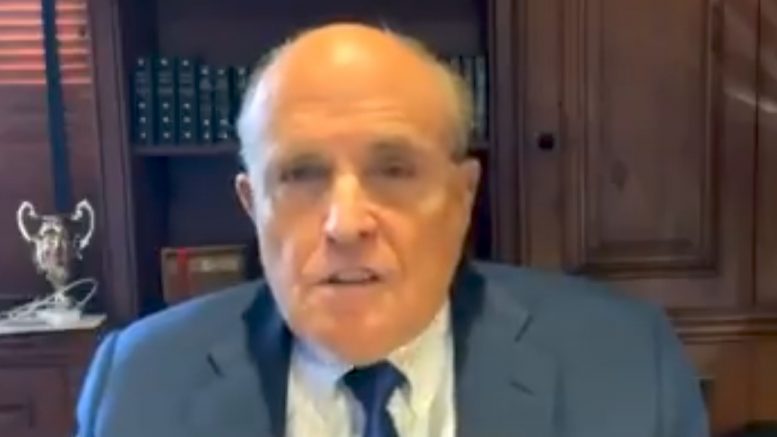 Rudy Giuliani pointed to potential fallout from the Maricopa County audit in Arizona as a reason for why Joe Biden’s Justice Department and FBI ramped up investigative efforts against him, which included his apartment and office to get raided by federal investigators just weeks ago.

Appearing for an interview with Sebastian Gorka on Newsmax, Giuliani said federal officials under Biden are ‘worried’ about the audit that is underway. And they specifically targeted him because ‘they know’ that he ‘started it’ and if ‘something goes wrong’, they’ll have to deal with his ‘big mouth.’

Related Article: Jesse Watters on Giuliani Getting Raided: “This Is Just Payback for Rudy Blowing Up the President’s Son’s Scandal”

“They also, I think, are very worried about what’s going on in Arizona,” Giuliani said. “They spent three months, four months blocking. So if there is nothing wrong in Arizona, three months ago they would’ve turned over all of the paper ballots, all of the machines. Why do you fight this battle to hide them?”

“And they know that I started that. They know if something goes wrong there, they’re gonna have to deal with my big mouth. And they’re doing the best they can to try to destroy my credibility,” he declared.

.@RudyGiuliani says he thinks they’re worried about what’s going on in Arizona. They know if they did something wrong there they’re going to hear his big mouth and they’re trying to discredit him before hand. pic.twitter.com/lPnHhUnnAw

Here are a couple more clips from Rudy’s interview:

.@RudyGiuliani says he’s worked with the FBI for 17 years and always had a great relationship with them. Then they come beating on his door at 6o’clock in the morning with search warrants. pic.twitter.com/H3MZbCTf5Z

Greg Kelly Questions If Biden Is Really In Control, Indicates The Three ‘Most Powerful People’ He Suspects Are In Charge