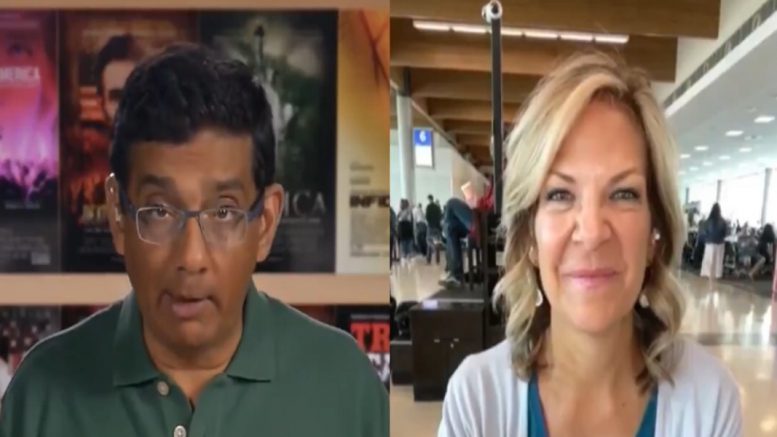 Dinesh D’Souza asked Dr. Ward, “Let me follow a thought experiment. Let’s just say that the Arizona audit reveals that Maricopa County, which is the county that delivered the state for Biden, tips to Trump, or it subtracts enough invalid votes that Trump wins the state of Arizona. What happens? Does Arizona then declare that Trump is the winner? Follow the process out. What happens if the audit reveals that Trump won Arizona?”

Dr. Kelli Ward responded: “The margin of error in Arizona is razor thin– 0.3%, just a little over 10K votes separating those two candidates.”

“So the likelihood of finding something is very, very high, and I think that’s why the Democrats are panicking, why they’re in a frenzy,” she suggested.

“These are unprecedented times, but they’re gonna call for unprecedented solutions, in my opinion. One potential is for the Republican Party of Arizona, because our electors will have been disenfranchised– we will have been harmed– is to take that to court to say the true electors are not the ones who signed the paper originally– that we need to install ours,” Dr. Ward said.

“We may have, I’m not sure that the legislature will have the power to do anything themselves, other than to change law for future, but the certifying body, those counties and even the secretary of state, could be forced to decertify what they previously certified,” she explained. Continued Below

“So, I think it’s not known. We can’t have an illegitimate president that is seated. I think it is bad internally in our country. It’s bad for us obviously with our enemies around the world and with our status around the world. So this has to be corrected for 2020 and going forward into perpetuity.

On Monday, the 45th President released a statement via “From the Desk of Donald J. Trump”, saying in part, “The Fake News media refuses to cover the greatest Election Fraud in the history of our Country. They have lost all credibility, but ultimately, they will have no choice!” Video Below

(Related: Trump On ‘Bombshell’ MI Election Case: “If A Thief Robs A Jewelry Store Of All Of Its Diamonds (The 2020 Presidential Election), The Diamonds Must Be Returned”)