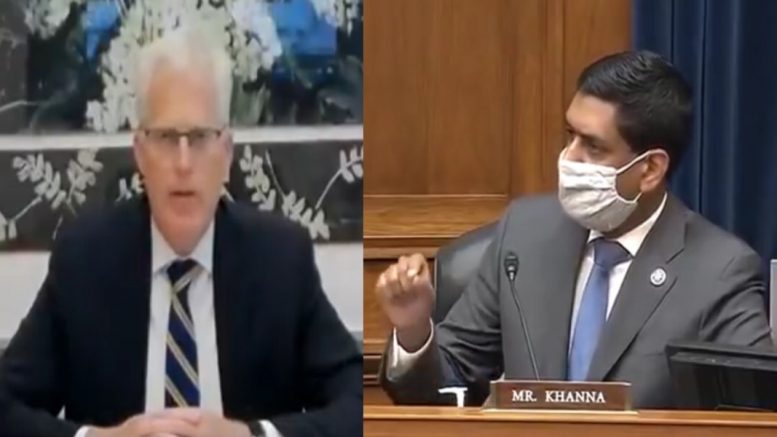 During a House Oversight Committee hearing Wednesday over the events at the Capitol on January 6th, Rep. Ro Khanna (D-CA) grew visibly irritated as the 45th President’s former acting Secretary of Defense Christopher Miller refused to admit mistakes or give an apology.

“Have you no sense of accountability, no sense of shame?” Khanna asked. “Secretary Miller, I want to ask you today: Will you at the very least apologize to the American public for what happened on your watch?”

Rep. Ro Khanna claimed, “I have never been more offended on this committee by a witness statement than yours. You were more concerned about defending your own reputation and justifying your own actions, than the sanctity of this Capitol and the sanctity of our democracy”.

Khanna asked Christopher Miller to apologize for “what happened” on the former acting Secretary of Defense’s “watch” on January 6, however, Miller answered by praising U.S. service members, until Khanna interjected.

Miller told Rep. Khanna, “The Department of Defense and our members of the armed forces preformed magnificently on January 6 and following, to secure the Capitol.” Continued Below

The California Democrat grew visibly irritated when Miller continued to praise the National Guard instead of taking orders from Rep. Khanna.

“Is it your testimony that you refuse to apologize to the American public for what happened?” Khanna asked again.

“I stand by every decision I made on January 6,” Mr. Miller replied. Video Below

Khanna claimed there was a 36-minute delay from when Miller decided to send more National Guardsmen to the Capitol and when his order was received. “Are you not aware of that timeline?” Khanna wondered. “I mean, everyone in the country is aware that it took 36 minutes.”

When Miller said he has seen several timelines of the events of January 6 along with inaccurate information about what happened, Khanna cut him off and vented, “You were in charge of the whole department! …You’re saying you didn’t know that it took 36 minutes. Senators know, congress-people know, every journalist knows, and you, who made the order don’t know? That’s worse than if you knew.”

Khanna also accused Miller of “having the gall” to try to hide behind the honor of U.S. troops. “It’s you who has let them down!” Khanna claimed. “I can’t believe we have someone like you in that role– had someone like you.”