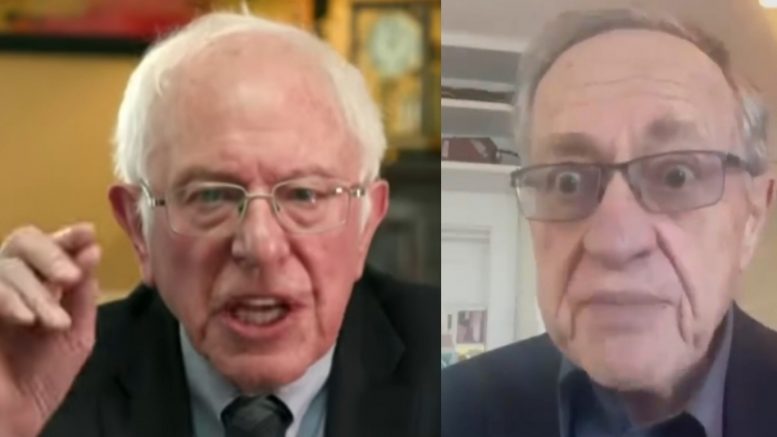 Self-proclaimed liberal attorney Alan Dershowitz slammed Bernie Sanders on Friday over remarks that the senator from Vermont made in regards to the conflict between Israel and Palestine.

In a New York Times opinion piece published on Friday, Sanders, who is Jewish, called for an immediate ceasefire and an “evenhanded approach” to the Israel-Palestine conflict.

“Israel has the absolute right to live in peace and security, but so do the Palestinians,” Sanders wrote in his op-ed.

He went on to call the act of Hamas firing missiles into Israel “unacceptable,” and that Israel has a “right to defend itself.” However, Sen. Sanders said that the United States has neglected the rights of the Palestinian people and need to stop being “apologists” for the way Israel has treated Palestinians.

Related Article: Pastor Jeffress Rips Bernie’s Israeli Stance: ‘He Is Completely Illiterate When It Comes To What The Old Testament Teaches’

Appearing on Newsmax, Dershowitz said, “Inadvertently you get the social media supporting Hamas, the New York Times supporting Hamas, and it sends a very powerful message: ‘Do it again. Kill children, you know, kill civilians — attack, attack, attack…’ You’ll prevail on this because of the antisemitism that stimulates so much of this. And you can be a Jew and an antisemite.”

“…Bernie Sanders, who’s Jewish, is a self-hating Jew,” he added. “A self-hating Jew who is willing to see Israel be defeated militarily by a terrorist group because he’s on the hard left.” Video Below

.@AlanDersh: “You can be a Jew and an antisemite…Bernie Sanders, who's Jewish, is a self-hating Jew" pic.twitter.com/OgACWe40ko