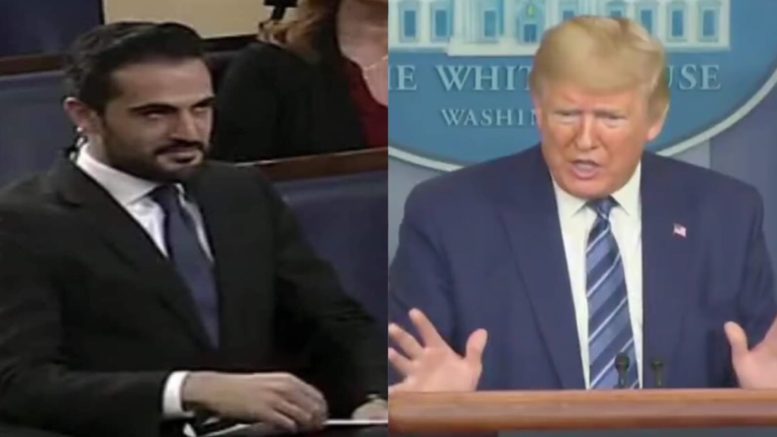 “The doctors that are treating coronavirus patients, they have the medical expertise to determine whether or not they should prescribe Hydroxychloroquine. And there are already clinical trials in place looking at Hydroxychloroquine. So why not just let the science speak for itself? Why are you promoting this drug?” Diamond asked President Trump.

“I’m not. I’m just very simply– I’m not at all. Look, you know what I’m trying to do? I’m trying to save lives,” President Trump explained.

The CNN reporter interjected to say: “You come out here every day talking about the benefits Hydroxychloroquine.”

The Commander in Chief responded: “I want them to try it. It may work and it may not work. But if it doesn’t work, it’s nothing lost by doing it. Nothing. Because we know long term– what I want: I want to save lives. And I don’t want it to be in a lab for the next year and a half as people are dying all over the place.”

Diamond interrupted again to ask the president: “It’s already out there. Doctors are already able to prescribe it. So what did you accomplish?” Continued Below

“I’ll tell you what I accomplished. We bought massive amounts of it. 29 million doses of it. We have it coming from all of the labs, we’re actually now doing it here. Because in case it does work, we want to have it,” President Trump explained.

“Now, it may not work, in which case, hey, it didn’t work. And it may work, in which case, it’s gonna save a lot of lives. Now a lot of people say if the people walking in prior to getting it– if they take it, it has a profound effect. Well, maybe it does– I don’t want to wait a year and a half to find out. And only CNN would ask that question; fake news,” the president pointed out. Video Below

An international poll of more than 6,000 doctors released Thursday found that the antimalarial drug hydroxychloroquine was the most highly rated treatment for the novel coronavirus, reported Washington Times.

The survey conducted by Sermo, a global health care polling company, of 6,227 physicians in 30 countries found that 37% of those treating COVID-19 patients rated hydroxychloroquine as the “most effective therapy” from a list of 15 options.

White House Bureau Chief at The Washington Post, and a Political Analyst for NBC News and MSNBC, Phillip Rucker, tweeted: “‘What do I know? I’m not a doctor,’ Trump acknowledges, amid a lengthy monologue touting the potential of hydroxychloroquine, a drug that is unproven, to cure people from the coronavirus.”

Deputy Director of Communications and Rapid Response for the Trump 2020 campaign, Matt Wolking, responded: “This is not journalism. Also, that is the same Dr. Fauci who said he would prescribe that drug to coronavirus patients.”