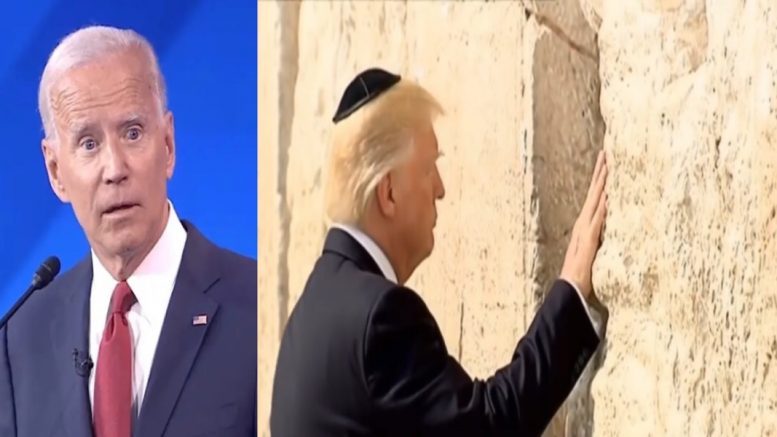 Former President Trump issued a statement Tuesday from “The Desk of Donald Trump” over the escalating violence in Israel, suggesting that Joe Biden’s foreign policy has contributed to the ongoing unrest.

His comments came as a barrage of rockets were seen over the skies in Israel including near Tel Aviv following reports that Israeli missile fire caused the collapse of a 12-story building in the Gaza Strip, The Hill reported.

The 45th President criticized Joe Biden for what he called “weakness and lack of support for Israel” as the violence intensifies:

When I was in office we were known as the Peace Presidency, because Israel’s adversaries knew that the United States stood strongly with Israel and there would be swift retribution if Israel was attacked.

Under Biden, the world is getting more violent and more unstable because Biden’s weakness and lack of support for Israel is leading to new attacks on our allies. America must always stand with Israel and make clear that the Palestinians must end the violence, terror, and rocket attacks, and make clear that the U.S. will always strongly support Israel’s right to defend itself.

Unbelievably, Democrats also continue to stand by crazed anti-American Rep. Ilhan Omar, and others, who savagely attack Israel while they are under terrorist assault. Continued Below 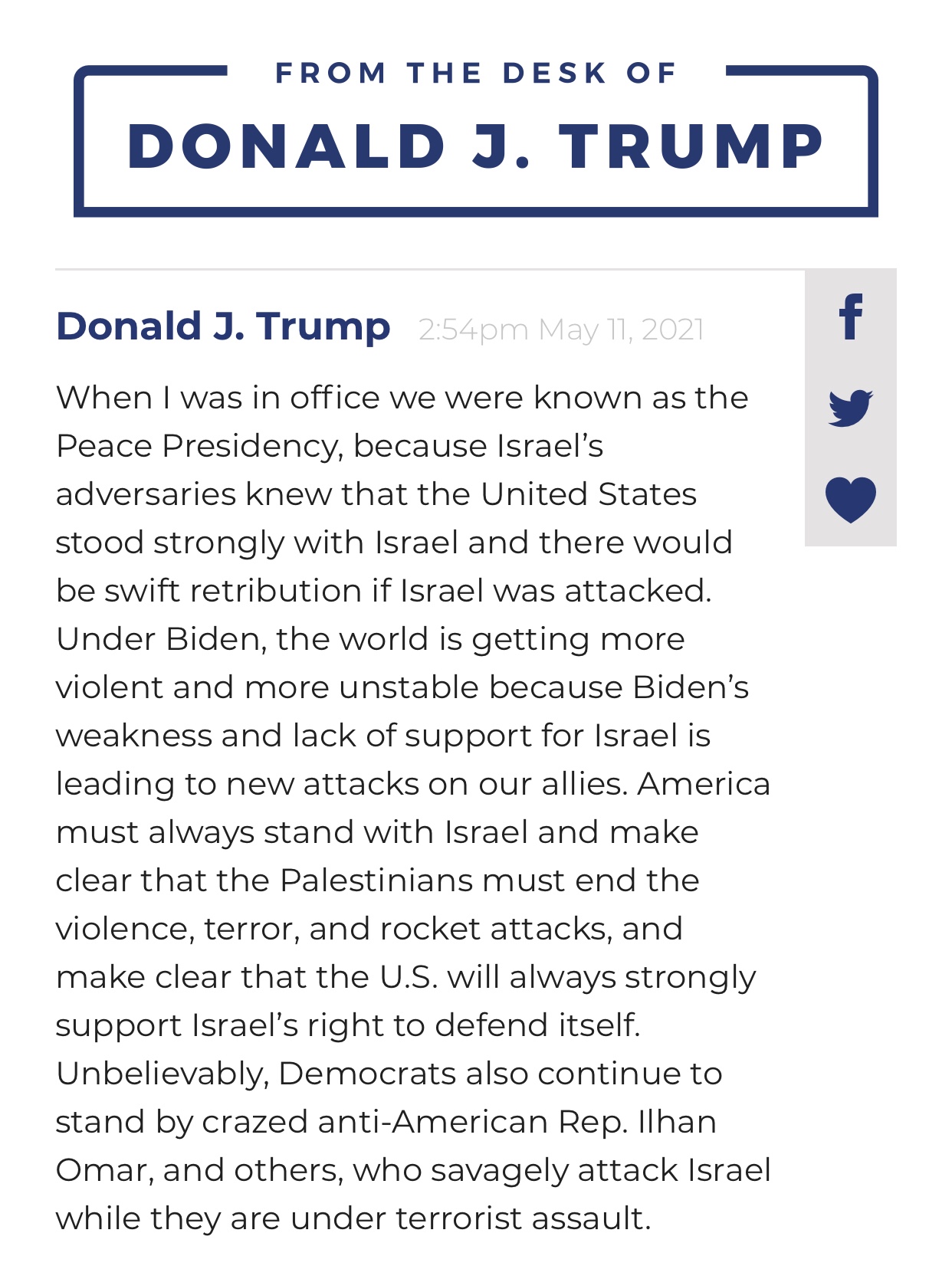 The former president helped broker the Abraham Accords, an first-of-its-kind agreement for diplomatic relations between Israel, the United Arab Emirates and Bahrain. The Trump administration also moved the U.S. embassy from Tel Aviv to Jerusalem, a move that was met with widespread criticism from global leaders due to the holy city’s disputed status, as reported by The Hill.

On this day, in 1967, Jerusalem was reunified as the rightful capital and homeland of the Jewish people. Today, we remember and celebrate our Administration’s historic decision to move the U.S. Embassy to its rightful capital of Israel! #JerusalemDay pic.twitter.com/zHQxE8zPvC

Trump weighed in on the ongoing violence for the first time Tuesday as news reports showed a cascade of rockets raining down in Israel, including ones intercepted but also overwhelmed its Iron Dome near and around Tel Aviv that the Israeli Defense Forces said came from Hamas militants in Gaza. Videos also showed missile fire striking a building in the Gaza Strip that AP and Reuters reported housed offices used by Hamas political leadership.

The escalation is considered to be some of the most intense fighting between Israel and Hamas, a U.S.-designated terrorist organization, since the 2014 war.

Israeli air strikes killing civilians in Gaza is an act of terrorism.

It’s unconscionable to not condemn these attacks on the week of Eid. https://t.co/vWWQfMqBkT

Many will tell you Israel has a right to defend itself, to safety and security, but are silent on whether Palestinians have those rights too.

Until we can defend the rights of Palestinians just as we do Israelis, we have no leg to stand on when it comes to justice or peace.

This unsurprising response is devoid of empathy and concern for human suffering.

He can’t even condemn the killing of children. https://t.co/eQjysy2VCP

Statement from @IlhanMN, @RashidaTlaib and @RepAndreCarson: "For decades, we have paid lip service to a Palestinian state, while land seizures, settlement expansion, and forced displacement continue, making a future home for Palestinians more and more out of reach." pic.twitter.com/re7XpETJBe

Palestinian children deserve advocates for their humanity, safety and security. No exceptions.