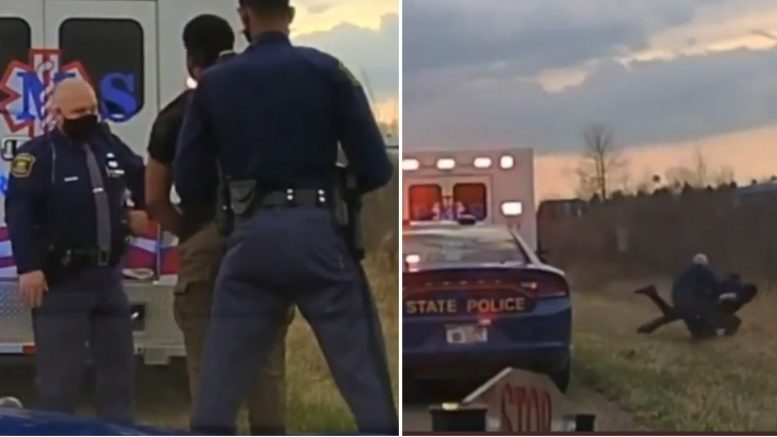 Rep. Jewell Jones reportedly had a loaded gun in the cupholder and was intoxicated at twice the legal limit after crashing his vehicle in a ditch along I-96.

He is then seen resisting arrest as officers struggle with him on the ground. State police reportedly took two uses of a taser and pepper spray to get Jones under control.

As reported by ClickOnDetroit:

Jones, 26, faces charges including resisting and obstructing officers — a felony — driving with a high blood-alcohol content, reckless driving and possessing a weapon while under the influence. Video Below

In response, Michigan’s GOP released the following statement via Twitter:

“Michigan State Police pulled over a Michigan Democrat lawmaker April 2nd for driving drunk. He threatened to call @GovWhitmer on the spot.

“The 911 calls came pouring in as the Democrat State Representative’s black Chevy Tahoe sped down I-96. For almost 50 miles, the vehicle with the vanity plate “ELECTED” was driving so recklessly that at least one person saw him go the wrong way before rolling into a ditch.

“When police arrived at the scene, according to @MIRSnews, Democrat State Rep. Jewell Jones and his unidentified female passenger were found with their pants down as the Tahoe remained in the ditch.

“(WARNING – IT GETS GRAPHIC): Jones was ‘holding the woman up’ near the passenger side door, according to a police report obtained by MIRSnews. The woman’s pants “were down” as she vomited and Jewell’s pants “were partially down” when a paramedic arrived at the crash site.

“Police engaged in a struggle with Jones, and at one point as Jones is on the ground struggling with multiple officers, he shouts: ‘Let me sit up, (N-Word).’

“Meanwhile, the woman was “unable to stand on her own and was essentially unresponsive” as paramedics tried to administer care, the police report noted.

“The paramedic told police that Jewell identified both himself and his passenger as ‘people of importance’ and flashed his wallet badge, the report noted.

“When a state police trooper asked for Jones’ identification, Jones refused, at one point prompting the trooper to tell Jones, ‘don’t be dumb.’ During their exchange, Jones responds “I can’t do that” when asked again for his driver’s license and ID.

“At that point, the officers had had enough. They put their hands on Jones and wrestled him to the ground. Keep in mind a gun was also inside his car, reportedly in the cupholder.

“Jones continued to resist and was brought to the ground by state troopers, who told him to ‘stop resisting.’

“This is when the Democrat threatened police, saying, ‘I’ll call Governor Whitmer right now. He continued, ‘When I call Gretchen I need y’alls IDs and badges.’

“In addition to invoking Whitmer’s name, Jones tells the troopers, ‘I’m not giving you my arm unless you shoot me. You shoot me, I’ll get up,’ according to the police report obtained by MIRS news.

“Officers do get Jones into handcuffs and he is eventually placed in the back of a Livingston County sheriff’s deputy’s vehicle, although video shows he resisted that request, as well. He was eventually transported to the county jail, where he was held overnight.

“The level of hypocrisy by Democrats here in Michigan is stunning. Their mantra is, ‘it’s rules for thee, but not for me.’

“This Democrat put thousands of families at risk by driving extremely drunk on a busy interstate between Lansing and Detroit. Will this be covered fairly? There are still so many questions that must be answered.

“QUESTION: Why hasn’t @GovWhitmer come out in support for law enforcement, particularly the Michigan State Police? Leaders lead, they don’t hide, and @GretchenWhitmer is hiding.”

Nancy Pelosi on Justice Clarence Thomas: ‘I Don’t Think he Should’ve Ever Been Appointed’