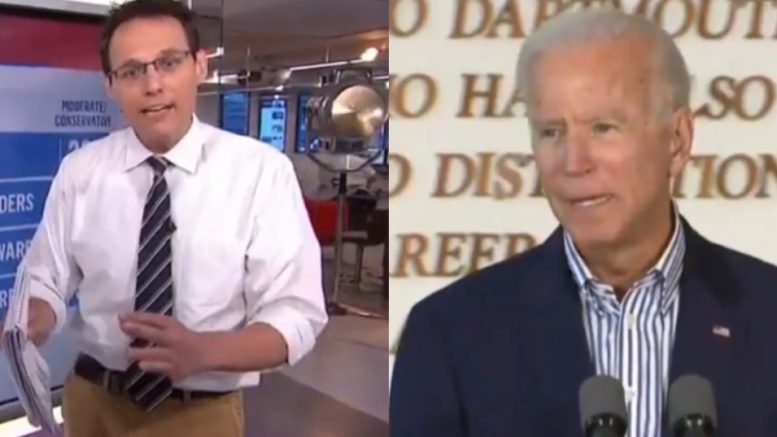 Democrat Presidential nominee, Joe Biden, was dealt some bad news on Monday as a new national poll suggests his large lead over the rest of the field has vanished…and then some.

The poll that was conducted by Monmouth University has Biden now in third place, trailing both Senators Elizabeth Warren and Bernie Sanders.

While analyzing the poll, MSNBC’s Steve Kornacki said the big question that comes from the new poll is “What will other polls show?” And he pointed to data from the poll that shows why Biden is “in particular trouble.”

Kornacki presented numbers that indicate Biden losing his grip of moderate support, as he now leads the field by only two percentage points.

Kornacki then showed that the former VP’s biggest problem lies with those who are under 50 years old, where Biden now only holds 6% support and is tied for fourth place with Andrew Yang.

“For Biden, look, ideologically — not getting what he normally gets from moderates, from conservatives in this poll,” Kornacki said.

“And age-wise, we’re not used to seeing him do too well among folks under fifty,” he continued. “But the floor pretty much falling out from at least, again, from this polling.” Video Below

John Berman Warns Peter Navarro Not To Say ‘China Virus’ Again On The Air, Does It Anyway