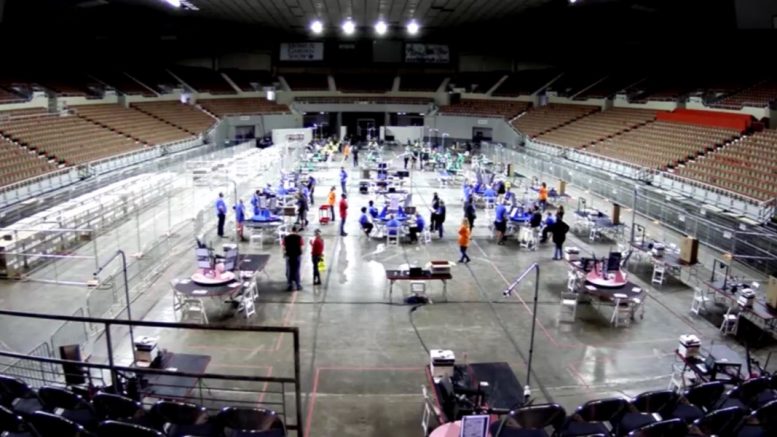 A brief weekend pause in the Arizona Senate’s election audit that a judge ordered on Friday won’t happen as the Arizona Democratic Party declined to put up a $1 million bond that the judge requested to cover any expenses that the Senate wrongfully incurs due to the halt, AZ Mirror reported.

In February, Maricopa County Superior Court Judge Timothy Thomason ruled that the Arizona Senate can obtain access to 2.1 million ballots and election equipment from Arizona’s most populous county, giving the green light to audit results of the November 2020 election.

The county delivered all 2.1 million ballots to the Senate’s custody at the Veterans Memorial Coliseum on Thursday for the unprecedented recount, which was set to begin Friday morning.

In a last-minute lawsuit, however, the Arizona Democratic Party and County Supervisor Steve Gallardo, filed a lawsuit Thursday in an effort to stop the state Senate audit. The suit calls for a temporary restraining order to prevent the audit, arguing that the Senate has not set up proper security to protect ballots, voting machines and voter information.

Superior Court Judge Christopher Coury said he wants to ensure the recount fully complies with Arizona law and asked for more information by Monday morning on the audit’s policies and procedures, AZ Central reported. Continued Below

If Gallardo or the Democratic Party post a $1 million bond, the audit will be paused at 5 p.m., the judge said, adding, “I do not want to micromanage and it is not the posture of this court to micromanage or even to manage the process by which another branch of government, the Legislature, the Arizona state senate proceeds”.

Roopali Desai, the Democrats’ attorney, said the party won’t put up the bond. That means the audit will continue uninterrupted, AZ Mirror reported.

Nonetheless, the audit will still have to comply with several other orders Coury issued during a hearing on Friday. The judge ordered the Senate and its audit team to comply with all laws governing the right to a secret ballot and the confidentiality of voter registration data, per AZ Mirror. Continued Below

A livestream of Arizona‘s vote audit can be viewed at: azaudit.org.

The pause is off:

🚨 🚨 🚨 ALERT 🚨 🚨 🚨- This just in: Arizona Democratic Party declined to put up a $1 million bond that the Maricopa judge requested for the halt. #FullForensicAudit to continue this weekend uninterrupted. @ArizonaAudit

(Related: Trump On Dems Trying To Stop Maricopa County Audit: “Why Are [They] So Desperate To Stop This?…I Predict The Results Will Be Startling!”)