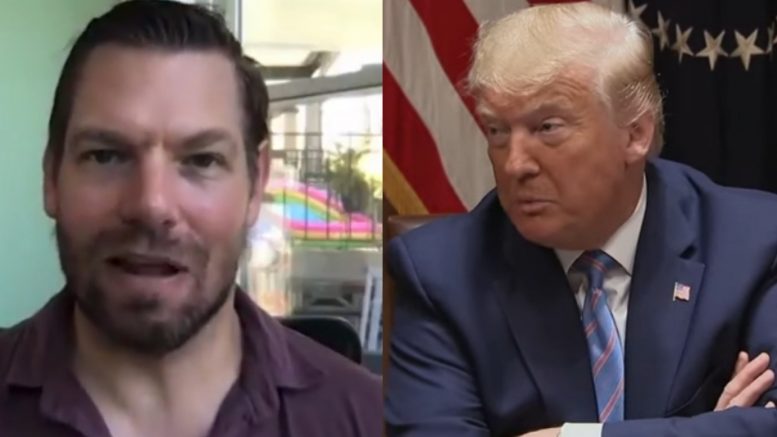 Congressman Eric Swalwell (D-CA) revealed that the Democrat party has been preparing for the possibility that President will refuse to leave office if he loses the 2020 election.

Swalwell addressed the topic while interviewing with political host Brian Tyler Cohen, who also is the managing editor for Occupy Democrats — the self-described “resistance” and “grassroots political information website dedicated to the goals of progressive Democrats.”

Related Article: Huckabee On Impeachment: Democrats ‘Had Nothing But Hot Air & Eric Swalwell Provided A Lot Of That’

“And while in our country you only need a simple majority to win, we believe we need almost a super majority meaning that it can’t be close,” he added. “Because if there’s a bunch of court cases and you need military officials or the Secret Service to make the call that you gotta get that guy out of the building because he’s not the legitimate President, you can’t make it close.”

Swalwell went on to say that the courts can’t be relied upon to make the right decision if the presidential election results were tied up. “So you have you have an overwhelming result,” he declared.

“So we’re putting a lot of pressure on ourselves to turn people out in a way that you can really make sure the result is obvious,” Swalwell said.

He then speculated that “we may have a scenario between November and January where he’s saying the result it fraudulent and you’re seeing outside foreign interference trying to really stoke fear and anxiety in our country so that you could just have this fog of what the result is, and he doesn’t leave.”

“So, the more people who turn out to make it clear to him what the will of the American people is, I think the easier it is for that junior officer who’s going to have to go in and say, ‘Sir you don’t live here anymore,” Swalwell concluded. Video Below

.@RepSwalwell: "We have considered the possibility [that Trump refuses to leave office] … The more people who turn out, the easier it is for that junior officer who's gonna have to go in and say, 'Sir, you don't live here anymore.'"