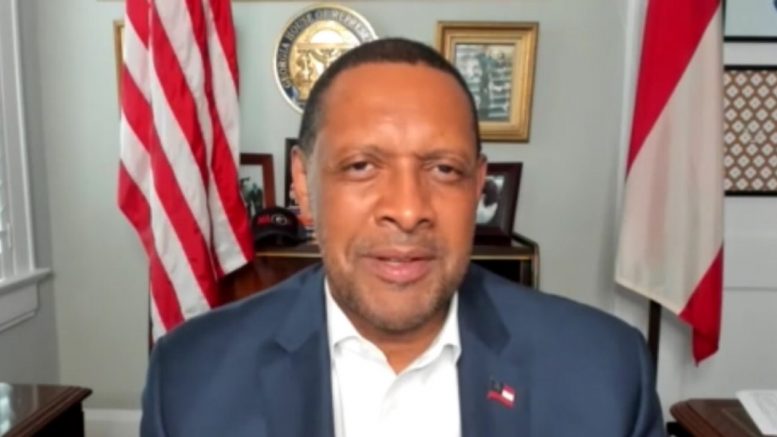 Vernon Jones (R), who is a candidate in the Republican primary for the 2022 Georgia gubernatorial election against incumbent Governor Brian Kemp (R), is calling for an independent, full forensic audit in the Peach State over the 2020 November general election.

“That drum beat is getting louder and louder for a full forensic audit. The Speaker of the House, as you know, came out this past weekend, as well as the chairman of Fulton County board of commissioners, who by the way, is a Democrat. So now, it looks like there is a bipartisan effort. And what are they saying? They’re all saying there should be a forensic audit,” Mr. Jones told Steve Bannon on “War Room” Monday.

Georgia’s Speaker of the House has called for an “independent investigation” into the 2020 presidential election in Fulton County. Speaker David Ralston made the demand in a Thursday letter to Fulton County Elections Director Richard Barron in which he called for the Georgia Bureau of Investigation to get involved to “determine if any irregularities or willful fraud occurred.”

Ralston’s call for an investigation into Georgia’s most populous county came the same day that state Sen. Burt Jones, a Republican on the Senate Government Oversight Committee, sent a letter to committee Chairman Sen. Marty Harbin calling on Secretary of State Brad Raffensperger to testify about the election results, Yahoo reported.

Separately, Raffensperger urged local officials last week to terminate both Rick Barron and Ralph Jones, the registration chief, for their “continued failures.” Raffensperger told Daily Caller, “Every time we think we’ve reached the peak of Fulton’s elections mismanagement issues, more comes to light. I’ve been calling for change in Fulton since day one. Maintaining public confidence in our elections begins in Fulton County.” Continued Below

“Where I disagree though, and I agree with the audit– I’m glad they’re joining me, but the Speaker is asking for the GBI (Georgia Bureau of Investigation) to do the audit. You and I both know that the GBI has already looked into it, according to the governor and Raffensperger in the past, and said there’s nothing there,” Vernon Jones stated.

“We also know that the GBI is neither qualified, equipped, or even have the resources or the know-how to do a forensic audit. So that is not a reason why it should go there. They don’t know anything, and plus they work for Brian Kemp. They work at a direction of the governor,” said Jones.

“There needs to be what I call ‘the people’s audit.’ An independent audit throughout 159 counties from an outside organization like Cyber Ninja[s]–someone who knows this audit process: the policies, the procedures, the technological advantage to going and examining these ballots, things of that nature. That is what’s needed, Steve. That’s the only way we can get to the bottom of what happened with the 2020 and 2021 runoff elections,” he urged. Video Below

Jones also said he is “hearing” that Georgia Governor Brian Kemp is “backing into a corner” and “seeing his political future going down”, adding that Kemp is “trying to find a way out, to come forward with an audit”.

(Related: Vernon Jones Drops a Four-Point Campaign Bomb on Gov. Kemp: “This Won’t Be the Case in My Georgia”)