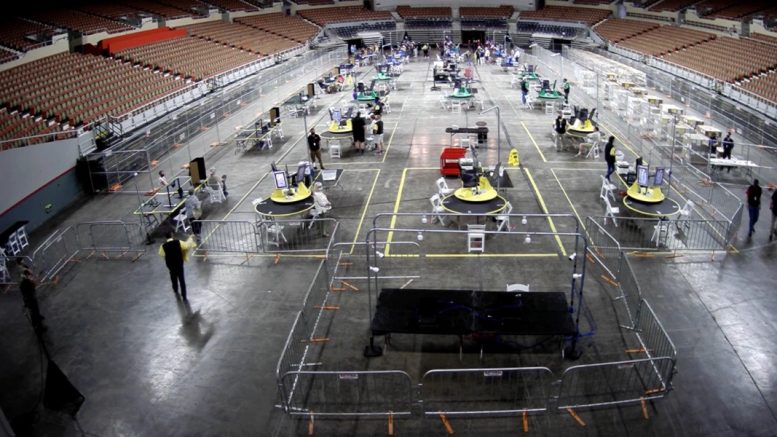 The Arizona Democratic Party filed a lawsuit Thursday in an effort to stop the state Senate audit of the November 2020 election in Maricopa County.

Maricopa County supervisor Steve Gallardo, alleges that the audit is “is no more than a temper tantrum from those still upset that they lost the election and it is deeply damaging to the integrity of our elections and our democracy.”

Steve Gallardo, the lone Democrat on the Maricopa County Board of Supervisors, said he was also concerned about ballot security and confidentiality.

In a tweet on Thursday, Gallardo claimed, “The sole reason for this lawsuit and injunctions is to protect the sanctity of the ballots and more importantly to preserve voters’ privacy from a sham audit that has been corrupted by agitators and conspiracy theorists. This corrupted process will not be transparent, dark money influencers have handed picked the folks to observe and witness the ‘audit’ that will be conducted by an uncertified and unqualified group.”

The suit calls for a temporary restraining order to prevent the audit, which was scheduled to start after the 2.1 million ballots were carted to the Veterans Memorial Coliseum on Thursday.

Republican Senate President Karen Fann has hired Cyber Ninjas to oversee the audit, including a hand recount of ballots. The Senate is paying $150,000, and an OANN host helped raise at least another $150,000 for the effort. Continued Below

Arizona Republican State Representative Mark Finchem on Wednesday, gave an inside look at where the full forensic audit of the 2020 November election for Maricopa County will be taking place: Veterans Memorial Coliseum on the state fairgrounds.

“You would think the Democrat Party would not only be doing a happy dance, they would be saying, ‘We’re gonna get in your grill and tell you this is how we beat you’. But they’re not doing that. In fact, they’re spending a lot of resources to try and fight this,” Finchem told Steve Bannon on “War Room Pandemic”.

A livestream of Arizona‘s vote audit can be viewed at: azaudit.org. Video Below

Democrats doing everything to stop audit, including filing lawsuits attacking the "integrity" of the process. So NOW they care about #ElectionIntegrity?!?! Nope. They just don't want Americans to be involved in our own elections. Watch audit live at https://t.co/YgAKN8EcYu pic.twitter.com/Nz3r8bcyDJ

Good Morning to everyone except those who’re trying to stop a forensic audit of the 2.1 million ballots in Maricopa County Arizona. History is being made as we speak.

Here’s the link to watch the audit. https://t.co/5uhlpwTGIf