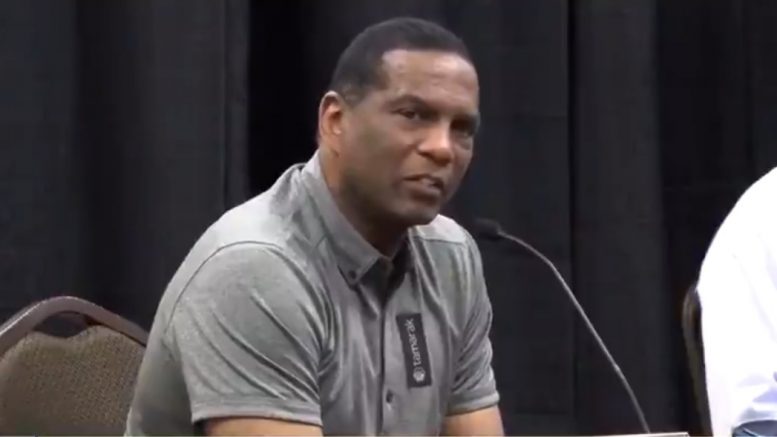 Congressman Burgess Owens (R-UT) slammed D.C. leaders and the “complicit media” for refusing to talk about the tragic experience that thousands of migrant children face throughout their journey to the United States.

While speaking at a round table discussion hosted by Rep. Jim Jordan at the border, Rep. Owens cited recent viral videos showing young children being dropped

over the 14-foot border wall and an abandoned boy who appeared to crying and scared as he traveled alone.

“We have people in D.C. who could care a less when they see three or five year-old girls dropped from a 14 [foot] high wall, when they see a nine year-old boy abandoned.

“I heard of a story last night, a young girl — trauma, can not speak anymore because she was gang raped. These are the stories we’re not being told.

“We have a complicit media who refuses to talk about this journey, this magnet of these young girls and boys. Many of them will not make it. Many will never talk to their parents again. Many of us make a question mark because we have an administration who could not look at these young people as people, but as a strategy.” Video Below

.@RepBurgessOwens says in Washington DC there’s people that don’t care about two girls getting dropped across the wall and falling 15 feet down. They don’t care about the little nine-year-old that got abandon by the group. pic.twitter.com/fycWmnaHc0

Rep. Owens went on to suggest that the federal government is “complicit” in allowing as much as $40 million going to “evil people” each month for trafficking migrants.

.@RepBurgessOwens says there’s $40 million going to evil people (The cartel) each month and the federal government is complicit. pic.twitter.com/8HlX8DaAF8

In ending, here is a clip of Rep. Owens speaking at a press conference at tbe border on Wednesday:

I visited the Southern border, and it made me think deeply about my kids and grandkids. We need to solve this border crisis and create a better future for the country. pic.twitter.com/mnA81WK0Bd

Doocy To Psaki: ‘Is Somebody Asking’ Migrants In ‘Del Rio, Texas’ For ‘Proof Of Vax Or Negative COVID Test?’

Sen. Cruz Sends a Letter to Biden: “Stop Denying Reality, Confront the Consequences of Your Policies & Allow the Media Access to These Facilities”

Rep. Johnson To Garland: “Did You Seek Ethics Counsel Before You Issued A Letter That Directly Relates To The Financial Interest Of Your Family?”