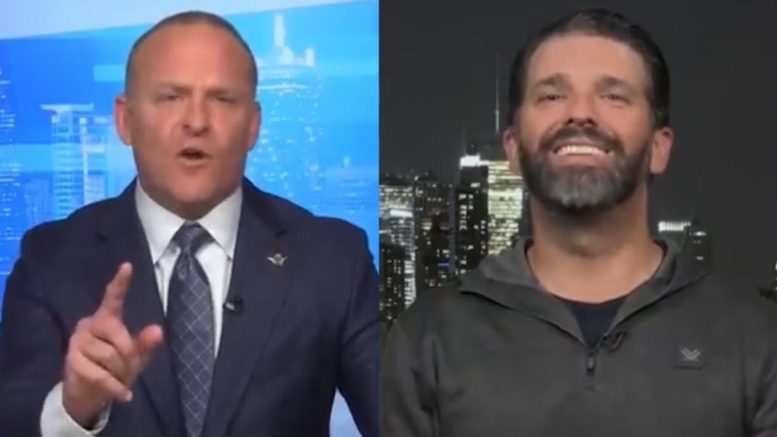 During an interview Tuesday on Newsmax, host Grant Stinchfield told Donald Trump Jr. that he tells people to “run for local office, run for your school board” and wondered, “Any chance you run for office soon?”

“I mean, I got the bug for the game. … Unlike so many Republicans, and you know, conservatives, I actually have the stomach for the fight,” Donald Trump Jr. said.

“When they attack me, it doesn’t bother me at all. I sort of look at it as a badge of honor. Not many on our side have that,” he said. “I guess that’s what allowed me to sort of create a little bit of a name for myself within the movement as well.”

“I’m gonna stay involved. I don’t know about office. You got to … make sure you want to do that and maybe some day. But today and for the coming years, I’m gonna be helping candidates who are fighting for the MAGA movement, fighting for the American worker, making sure the Republican Party continues its transition to be the Party of the working class America,” Don Jr. explained.

“The Democrats, they’re the Party of the elite and they’re the Party of illegal immigrants. They forgot all about the real Americans in the middle, the working class, they’ve totally abandoned them. I want to make sure we’re fighting for the MAGA Republicans and MAGA conservatives that make up the American working class, and I’m gonna fight for them very hard,” he added. Video Below

Donald Trump Jr.’s full exchange with Grant Stinchfield; his remarks over office begin at 6:45 into the video:

(Related: Don Jr. Doubles Down After Being Outed For Sharing ‘Edited Video’ Of Trump Hitting Biden With Golf Balls)