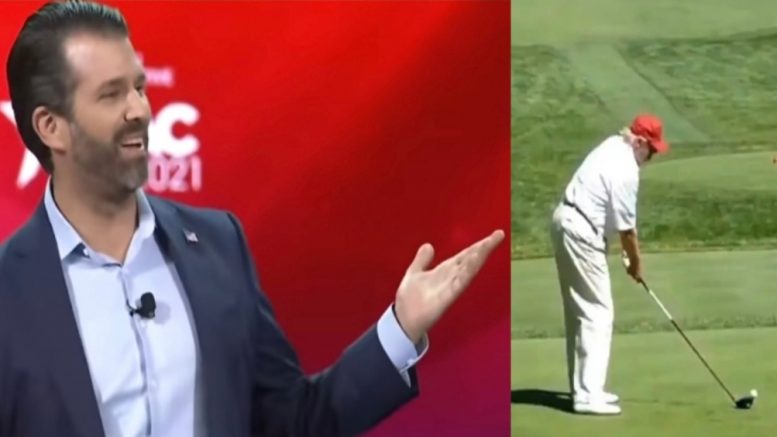 Donald Trump Jr. got called out by a major media outlet for posting an “edited video” of former President Trump knocking down Joe Biden with multiple golf balls.

In an article titled “Trump Jr. shares edited video showing father knocking Biden down with golf ball,” The Hill reported: “The 9-second clip begins with former President Trump on a golf course hitting a ball before cutting to footage of Biden from Friday when he stumbled twice on the stairs while boarding Air Force One for a trip to Georgia, with the edited video showing a golf ball hitting his head each time.”

Here is the post Don Jr. initially shared in response to the White House blaming the wind for Biden repeatedly falling:

It wasn’t the wind folks. pic.twitter.com/jYc01dBZCe

The Hill went as far as asking a Twitter spokesman if Trump’s Jr.’s post violated their policies.

In response, Don Jr. doubled down by resharing the video meme and sarcastically captioned it: “Wait you’re telling me this is edited??? I’m sorry, I had no idea I was spreading this kind of gross disinformation.” See Below

Wait you’re telling me this is edited???
I’m sorry, I had no idea I was spreading this kind of gross disinformation. https://t.co/ulLZTLtciK pic.twitter.com/8k6hlQ2UXe

Huckabee Explains Why Lewandowski Likely Didn’t ‘Wet His Pants’ At Tuesday’s Hearing: ‘He Was Enjoying Every Minute Of It’