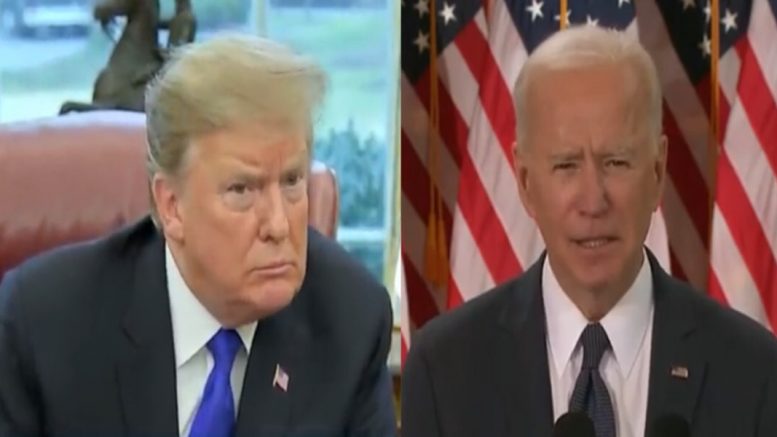 Former President Donald Trump issued a statement via email Wednesday over what he said is “Joe Biden’s radical plan to implement the largest tax hike in American history”, condemning it as a “giveaway” to China that would hurt workers in the United States and line the pockets of Washington’s special interests.

Biden is due to unveil the first part of his $2 trillion proposal on Wednesday in Pittsburgh, the blue-collar heart of a battleground state that helped deliver him the White House. Details released by the White House show it will propose billions of dollars for repairing and building roads, bridges, transport systems, and schools. But it will face a battle in Congress, where Republicans say corporate tax increases will destroy jobs, Washington Examiner reported.

Joe Biden’s radical plan to implement the largest tax hike in American history is a massive giveaway to China, and many other countries, that will send thousands of factories, millions of jobs, and trillions of dollars to these competitive Nations. The Biden plan will crush American workers and decimate U.S. manufacturing, while giving special tax privileges to outsourcers, foreign and giant multinational corporations.

Biden promised to “build back better”—but the country he is building up, in particular, is China and other large segments of the world. Under the Biden Administration, America is once again losing the economic war with China—and Biden’s ludicrous multi-trillion dollar tax hike is a strategy for total economic surrender. Sacrificing good paying American jobs is the last thing our citizens need as our country recovers from the effects of the Global Pandemic.

Biden’s policy would break the back of the American Worker with among the highest business tax rates in the developed world. Under Biden’s plan, if you create jobs in America, and hire American workers, you will pay MORE in taxes—but if you close down your factories in Ohio and Michigan, fire U.S. workers, and move all your production to Beijing and Shanghai, you will pay LESS. It is the exact OPPOSITE of putting America First—it is putting America LAST!

Companies that send American jobs to China should not be rewarded by Joe Biden’s Tax Bill, they should be punished so that they keep those jobs right here in America, where they belong. Continued Below

This legislation would be among the largest self-inflicted economic wounds in history. If this monstrosity is allowed to pass, the result will be more Americans out of work, more families shattered, more factories abandoned, more industries wrecked, and more Main Streets boarded up and closed down—just like it was before I took over the presidency 4 years ago. I then set record low unemployment, with 160 million people working.

This tax hike is a classic globalist betrayal by Joe Biden and his friends: the lobbyists will win, the special interests will win, China will win, the Washington politicians and government bureaucrats will win—but hardworking American families will lose.

Joe Biden’s cruel and heartless attack on the American Dream must never be allowed to become Federal law. Just like our southern border went from best to worst, and is now in shambles, our economy will be destroyed! Continued Below 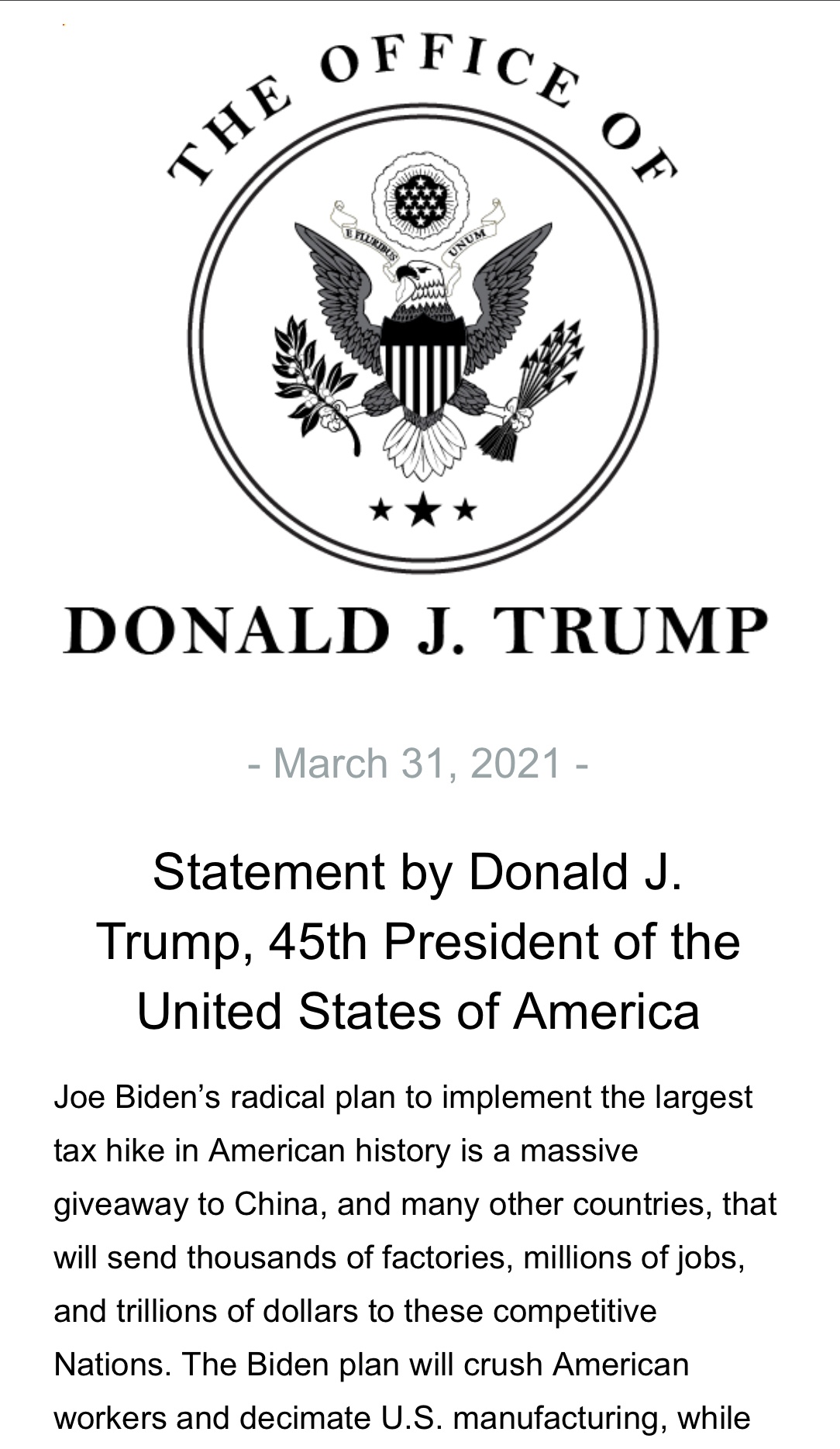 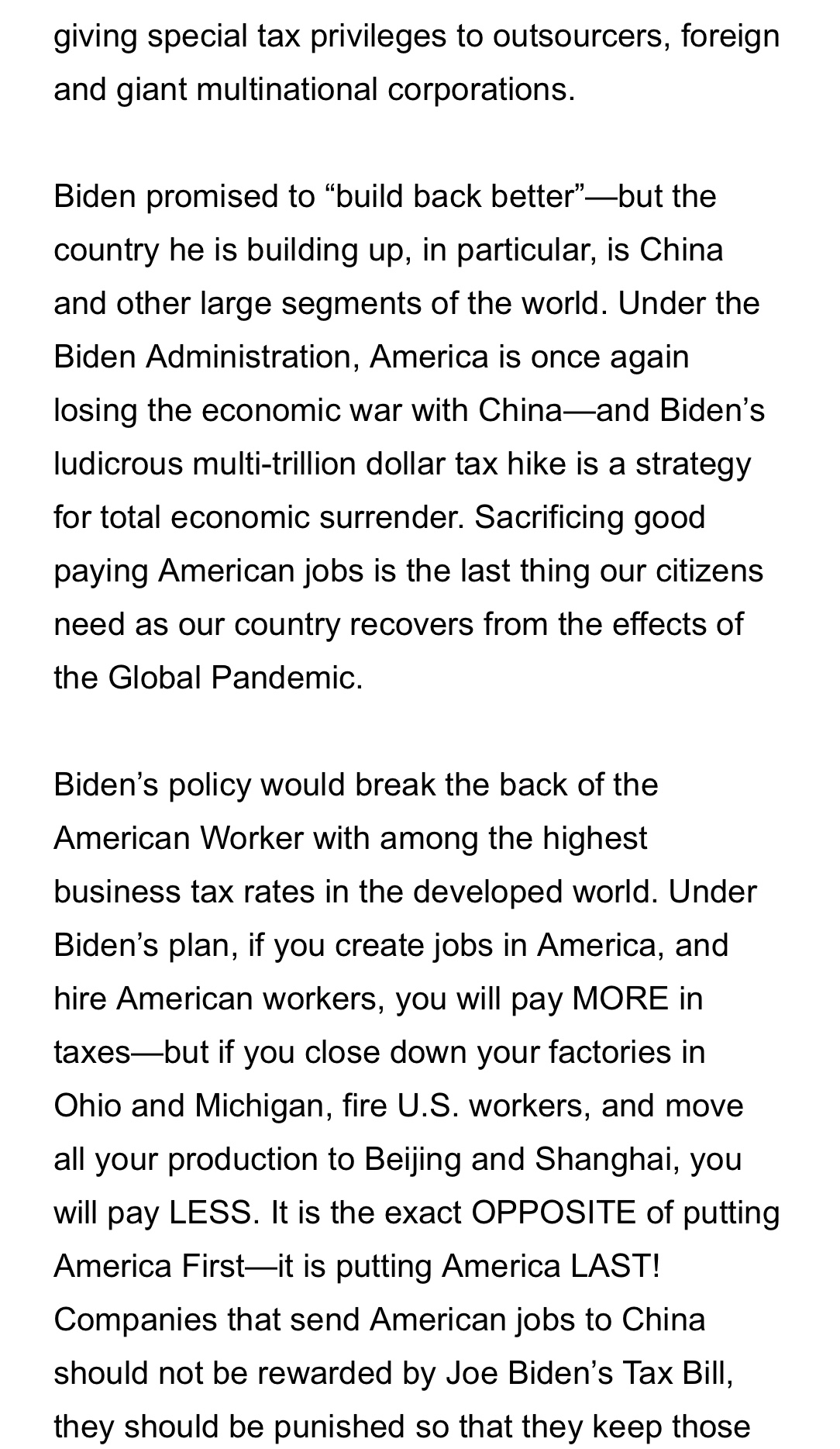 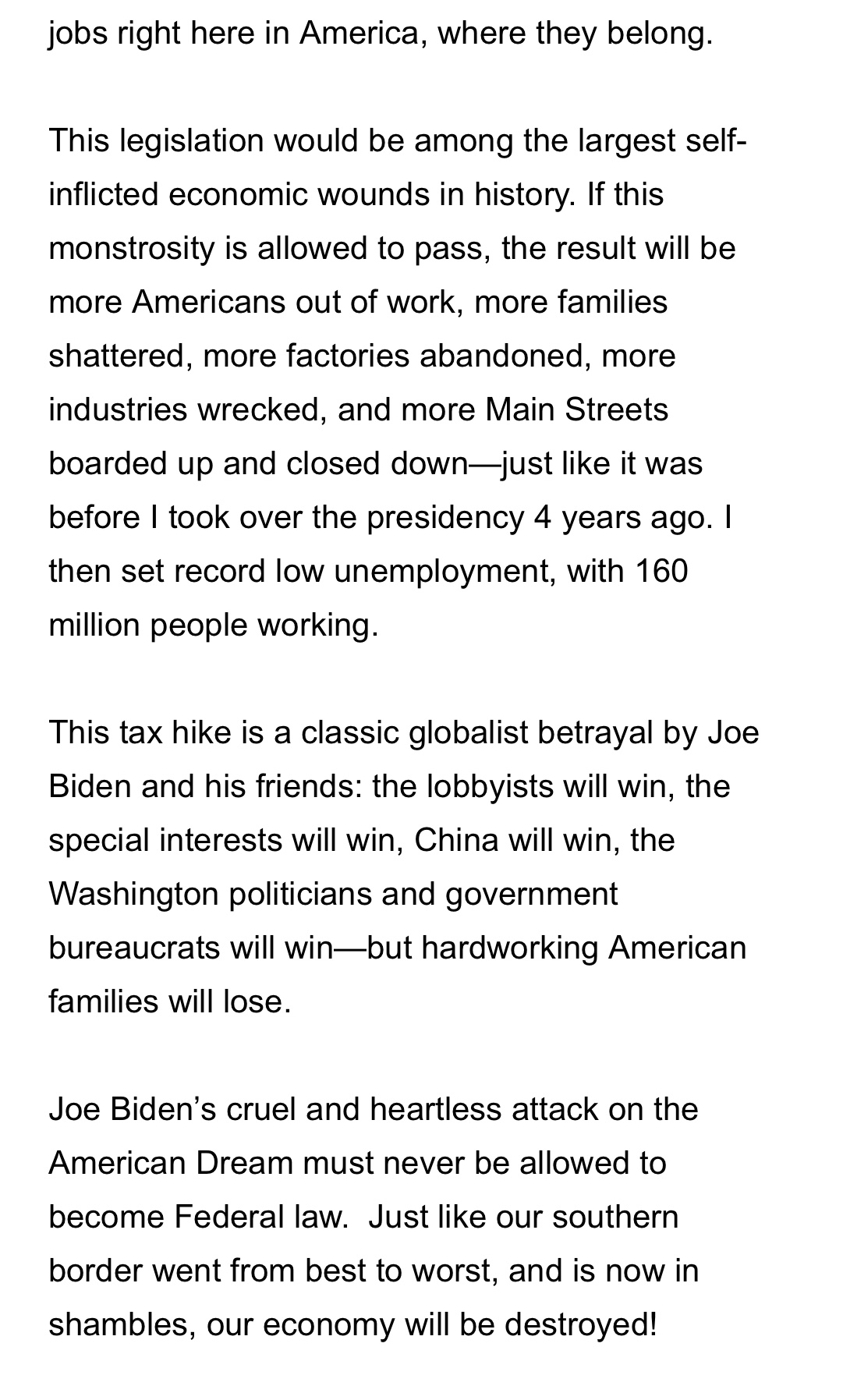