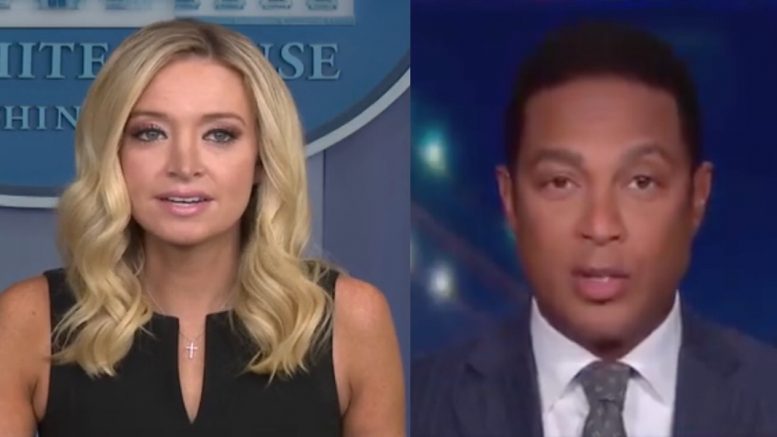 Tuesday during a White House press briefing, press secretary Kayleigh McEnany said that “President Trump will fulfill his duty” by appointing the “next Supreme Court Justice” as outlined in the Constitution under Article 2, Section 2, and also brought attention to remarks made Monday night by CNN’s Don Lemon.

McEnany said that President Trump has “already appointed 2 strong Justices to the Supreme Court”, adding that they are “Justices who will interpret the Constitution as written. Now he will nominate a third.”

“Contrast the president’s solemn constitutional duty with Democrats search and destroy politics,” she continued. “Nancy Pelosi has vowed to attack the president with ‘arrows’. Speaker Pelosi will not rule out impeaching this president for doing his job for fulfilling his constitutional obligation. AOC said that impeachment is an option, quote, ‘on the table’, while Chuck Schumer stood by nodding approvingly,” she pointed out.

“The plan of House Democrats is so rabidly radical that even Democratic Senator Tim Kaine has rebuked the the idea, calling the idea of using impeachment to delay a Supreme Court vote, quote, ‘foolish’. Some Democrats already have a backup plan if they don’t get their way on this nomination. Congressman Joe Kennedy said, ‘If he holds a vote in 2020, we pack the court in 2021. It’s that simple'”, McEnany noted of Democrats who are threatening repercussions. Continued Below

“Senator Ed Markey went further. ‘No Supreme Court vacancies filled in an election year. If he violates it when Democrats control the Senate in the next Congress, we must abolish the filibuster and expand the Supreme Court'”, McEnany pointed out of Massachusetts Democratic Senator’s remarks, adding, “Senator, the president is elected to a 4 year term. You cannot unilaterally reduce it to 3 years. The president is the president.”

“Democrats cannot win their argument on the merits. They cannot win on precedent so they much search and destroy,” she said.

“Don Lemon said the quiet part out loud last night. He said this: ‘We’re gonna have to blow up the entire system’ if the president does his job as outlined in the Constitution. That’s the difference between Republicans and Democrats. We fight to protect the system. We fight to protect the Constitution when Democrats say outright we are going to blow up the entire system because we do not get our way,” McEnany drew attention to. Video Below

(Related: Sen. Graham: “We’ve Got The Votes To Confirm Justice Ginsburg’s Replacement Before The Election”)