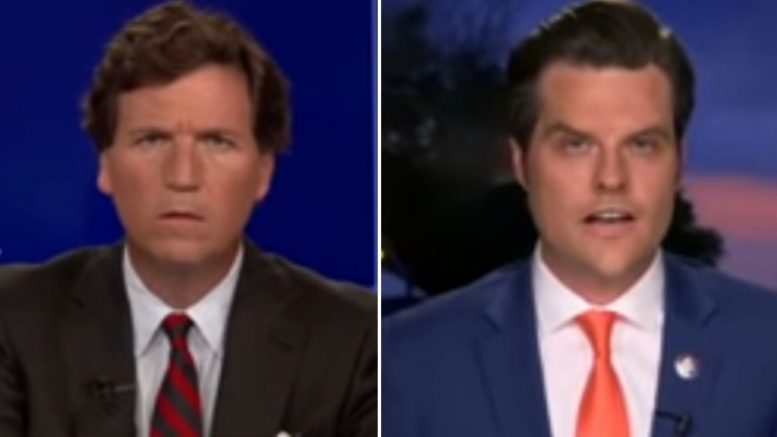 Congressman Matt Gaetz (R-FL) is fighting back against reports claiming that he is under investigation for allegedly trafficking a 17-year old girl.

The New York Times reported late Tuesday afternoon that the Justice Department is investigating Gaetz “over whether he had a sexual relationship with a 17-year-old and paid for her to travel with him.”

Rep. Gaetz immediately released the following statement in response to the allegation, claiming it’s all part of an “extortion” plot:

“Over the past several weeks my family and I have been victims of an organized criminal extortion involving a former DOJ official seeking $25 million while threatening to smear my name.

“We have been cooperating with federal authorities in this matter and my father has even been wearing a wire at the FBI’s direction to catch these criminals. The planted leak to the FBI tonight was intended to thwart that investigation.

“No part of the allegations against me are true, and the people pushing these lies are targets of the ongoing extortion investigation.

“I demand the DOJ immediately release the tapes, made at their direction, which implicate their former colleague in crimes against me based on false allegations.”

Rep. Gaetz appeared on Tucker Carlson Tonight later on Tuesday, where he dropped the name of the man he believes is behind the alleged extortion scheme.

“His name is David McGee,” Rep. Gaetz told Fox News host Tucker Carlson. “He was a top official in the leadership of the northern district of Florida as a prosecutor. He currently works at the Beggs & Lane law firm. As a matter of fact, one of the recordings that was made at the FBI and the Department of Justice’s request occurred at that law firm. And the money that was supposed to be paid today that would have shown even more evidence of David McGee’s work in this extortion scheme, that was foiled by the New York Times’ story and I believe that’s why this horrible information and these terrible allegations have been used this evening.”

He continued, “I know that there was a demand for money in exchange for a commitment that he could make this investigation go away along with his co-conspirators. They even claimed to have specific connections inside the Biden White House. Now, I don’t know if that’s true. They were promising that Joe Biden would pardon me. Obviously, I don’t need a pardon, I’m not seeking a pardon. I have not done anything improper or wrong.”

Gaetz went  on to say that what is most troubling to him is the “motivation for all of this,” and he cited how Democrat Rep. Ted Lieu is already calling for him to be removed from the House Judiciary Committee. Video Below